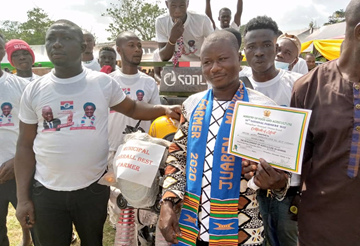 He said the government’s focus was to provide the needed financial and technical support to the private sector to add value to agricultural products as the base to boost the country’s industrialization agenda.

Speaking at the Municipal ceremony to mark the 36th national farmers’ day celebration at Achiase, Mr Ansah-Sem, said the various government’s agricultural policies and initiatives such as the Planting for Food and Jobs (PFJ), Planting for Export and Rural Development (PERD), Rearing for Food and Jobs (RFJ), Special Rice Initiatives (SPI), among others, were geared towards helping to provide the needed raw materials to support agribusiness in the country.

Citing the Juaben Food Bank, which was recently commissioned at Juaben, he said the initiative was a conscious step to support the private sector to provide the needed infrastructure to help reduce post-harvest losses in the area.

He said the 1,000 metric tonnes capacity warehouse, fitted with maize and rice millers, dryers, de-stoners, polisher, cleaner, grading, storage, treating and processing machines for maize and rice, was to facilitate the contract farming of key local farm products such as maize and rice.

Mr Ansah-Sem said the government was working in strong partnership with other private agricultural firms in the Municipality such as the Juaben Oil Mills Limited and the African Youth Employment Initiative an NGO, to help augment the large-scale production of Palm Oil and Fishery.

Mr Alex Adu Gyamfi, the Municipal Director of Agriculture, commended farmers in the area for their active participation in the various government initiatives to increase agricultural production in the Municipality.

Mr Akuffo Yakubu was adjudged the overall best Municipal farmer. He has over 105 acreages of land for the production of cocoa, cassava, plantain, among other crops, as well as animal husbandry.

Mr Yakubu commended the government for the awards and pledged to continuously work hard to increase food production to help improve the country’s food security.

Nana Tabono Bonsu III, Chief of Achiase, commended farmers for their hard work which had helped increase food production in the country.

UN Food Summit in Rome: Small-holder farmers in Ghana to get a boost