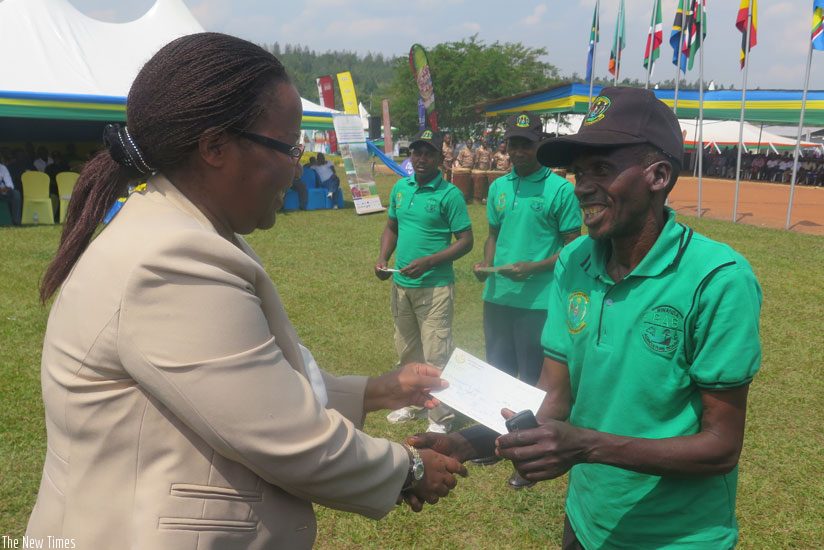 A farmer receives a cheque of Rwf100,000 from minister Mukeshimana. (Moses Opobo)

Organised under the theme: ?Agriculture Financing for Sector Prosperity?, the show attracted 205 exhibitors, both local and foreign. Some of the foreign exhibitors were from Kenya, China, Zambia, Germany and The Netherlands, among others.

Harvest Plus, which exhibited beans and maize seeds and a demonstration field emerged best local exhibitor, while for the third year in a row, the Kenya Seed Company Ltd walked away with the Best Foreign Exhibitor award.

Also awarded were sponsors of the expo, individual farmers, promoters, and journalists that excelled in covering the agricultural sector. Five best farmer promoters won cheques worth Rwf100,000 each, plus certificates of recognition.

Journalists were also rewarded with certificates and laptops for their excellent coverage of the agricultural sector.

Speaking at the closing ceremony, the Minister for Agriculture, Geraldine Mukeshimana commended both local and foreign exhibitors, noting that the number of foreign exhibitors at this year?s show had risen tremendously.

?This is good for our local farmers as it facilitates skills exchange and also brings quality and diversity to local agriculturalists.?

She added that this year?s show had also grown to cover the entire value chain in the agricultural sector, drawing in non-traditional exhibitors like banks, insurance and telecom companies.

Norbert Sendege, the Director General in charge of Crops at the Ministry of Agriculture and show chairman noted that the show had registered a 15 per cent rise in the number of international exhibitors, describing it as a clear pointer to growing investor confidence in Rwanda.

He further appealed to fellow exhibitors to initiate an interactive forum to keep in contact with each other even after the show.

He appealed to the ministry to consider coming up with mini-agricultural shows in the different provinces of the country to give rural farmers a chance as well.

?This would be the opportune time for us (agriculturalists) to pass on vital knowledge to them.?

Osore also asked the ministry to consider fixing a permanent date for the show, which should be announced well in advance to exhibitors.

?Some of us will start preparing for next year?s show in January, to start planting, so it?s very important to know the date by now, so that we know when to sow our crop.?

By Moses Opobo, The New Times