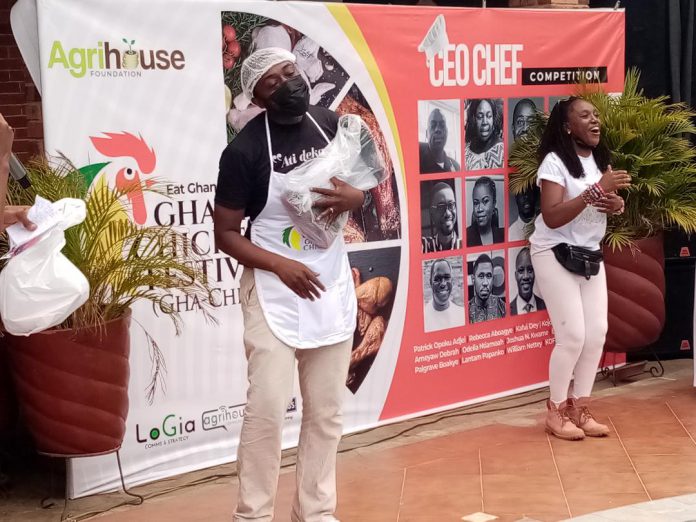 Agrihouse Foundation, a pro agribusinesses NGO, in collaboration with the Eat Ghana Chicken Campaign, has held a Chicken festival to create awareness on the importance of the poultry sector to Ghana’s economy.

The event aimed at wooing people to patronise locally produced chicken and to enhance job opportunities within the Poultry industry.

Madam Alberta Nana Akyaa Akosa, Executive Director of Agrihouse Foundation, said the poultry sector had a lot of job opportunities for Ghanaians and asked more local entrepreneurs to venture into the sector to help expand and grow the industry.

She said the festival was not only to raise awarenes of the local chicken but also to highlight its healthy nature compared to the foreign ones.

Madam Akosa said the agricultural sector should be more practical in order to make it more realistic to the ordinary Ghanaian and that the festival was one of the initiatives to achieve that feat.

She said the foundation had other initiatives to train people who wanted to venture into the sector, market linkage platform that helped bring farmers and buyers together, Women in Agriculture programme that ensured that women were recognised, among others, to help promote the industry in the country.

Their aim was to make sure there was a platform to link them to the market that were willing and capable of patronising locally produced chickens.

Mr Biekro said the festival was part of the Eat Ghana Chicken Campaign initiated by the Ghana Chicken Project, supported by the United States Department for Agriculture (USDA) to help boost the Chicken industry in the country.

He stated that the campaign sought to build the capacity of farmers, adding that the festival was to connect the value chain actors of the industry to broaden the market base within the sector.

Mr Biekro stated that the chicken industry was one of the key areas that could spur Ghana’s economic development , adding, “if it take 25 per cent of the market share, that is lots of jobs for Ghanaian youth.”

Mr Biekro said the festival would be replicated through out the country especially in the three heavy Chicken producing regions: Greater Accra Region, Ashanti Region and Brong Ahafo Region.

The festival was made of many activities such as Eat Chicken Cooking Competition, Chicken Sack Race and Draught.