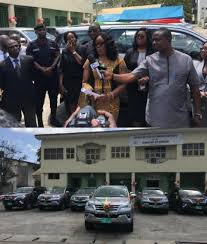 The Attorney General’s Department has handed over 13 vehicles to its regional offices to improve work performance and efficiency.

The vehicles, which comprise 10 Toyota Fortuners and three Nissan Hardbody “Pickups” were received by the heads of the regional offices.

Madam Gloria Akuffo, Attorney General (AG) and Minister for Justice, said early last year, she embarked on a tour to the regional offices of the AG’s Department to acquaint herself with the progress of work being carried out and the status of the facilities being used.

She said it was discovered that the offices had limited number of vehicles and this affected the effectiveness and quality of their work.

Also, it was realised that the offices lacked basic needs such as furniture, computers, washrooms, among others.

The AG revealed that the process for the procurement of the vehicles had already been started by her predecessor from the proceeds of an excess of $900,000 in their account.

She debunked the alleged corruption scandals levelled against the Department, adding that it had created an impression that they were hoarding money to later syphon for personal use.

Madam Akuffo explained that at every point in time, the existence and location of monies in the account was made known.

She added that when the money first hit their account, the former Deputy AG and former Justice Minister wrote to the then Chief of Staff, asking for directives as to what use the money might be put.

“While that response was yet to come, my predecessor the AG wrote to the Ministry of Finance asking to be allowed to use the money. The assurances were that the response would come and follow-ups were made. When I assumed office and it was brought to my notice, I did a reminder to the Minister for Finance with all the previous correspondents attached.

“I did follow-ups by telephone and personal visits and I got assurances that we would be given feedback. I am happy to announce to you that the feedback finally arrived and it was out of it that we were able to procure these vehicles,” she added.

She noted that even though the Department’s budget had never been enough to meet their needs, there was hope that the vehicles would help ease some of the difficulties they faced.

The AG appealed to the directors to ensure regular maintenance to keep the vehicles in good shape and increase their longevity.

She revealed that aside the procurement of the vehicles; they had also successfully refurbished their furniture, created two new car parks and restored all broken down washrooms in the head office.

Madam Emily Addo-Okyireh of the Eastern Regional Office expressed appreciation to the AG on behalf of all the regional heads.

She gave the assurance that they would put the vehicles to the best of use to ensure that the office of the AG moves forward in all the regions.