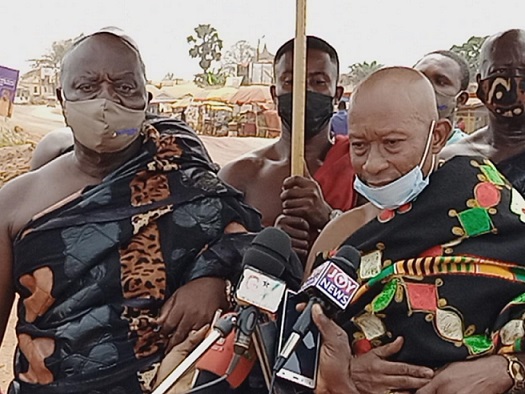 Traditional Authorities in the Asutifi North District of the Ahafo Region have expressed concern about the delay in the construction of the five-kilometre Kenyasi Number Two-Kenyasi Number One-Hwidiem stretch.

They include the Kenyasi Number One, Kenyasi Number Two and Ntotroso Traditional Areas, mining towns within the Newmont Ahafo Mine operational area, and they called on the government to expedite action for work to resume on the road before the people hit the street.

According to the chiefs, ‘Kofi Job’, the local contractor working on the stretch, has abandoned work for some time now, a situation they said was causing a nuisance in communities along the road.

At a news conference held at Kenyasi Number Two on Tuesday, the paramount chiefs, who owed allegiance to Asantehene Osei Tutu II, noted that because the contractor left the road un-tarred, it had resulted in excessive dust in the communities, causing respiratory problems among residents.

“The dusty nature of the road is affecting the visibility of drivers thereby causing several road accidents. Many lives have been lost and quite some injuries have been recorded.

“Commercial drivers are not willing to transport goods to the towns and this is worsening the economic hardships of resident,” Nana Kofi Osei Abiri II, the Paramount Chief of Kenyasi Number One indicated.

He regretted that construction works on the project came to an abrupt halt without prior communication to the chiefs and stakeholders, adding the contractor failed to erect warning signs and posts to direct drivers.

Nana Abiri II expressed appreciation to the NGGL for accepting to water the Kenyasi Township to control the dust emanating from the road for three months from January to March 2021 and called on the government to intervene for work to resume.

Barima Twereko Ampem II, the Paramount Chief of Ntotroso, noted that many of the stores and businesses along the road could not open because of the excessive dust.

He said the chiefs and people of the area were peace-loving, and appealed to the government to do something about the situation.

Barima Ampem II expressed concern about the deplorable nature of the bridge on the Tano River along the Ntoroso-Acherensua road and appealed to the government to rehabilitate it.

Some sub-chiefs from the Kenyasi Number Two Traditional Area represented Odeneho Dadieko Nsiah Ababio II, the Paramount Chief who could not attend the press conference.