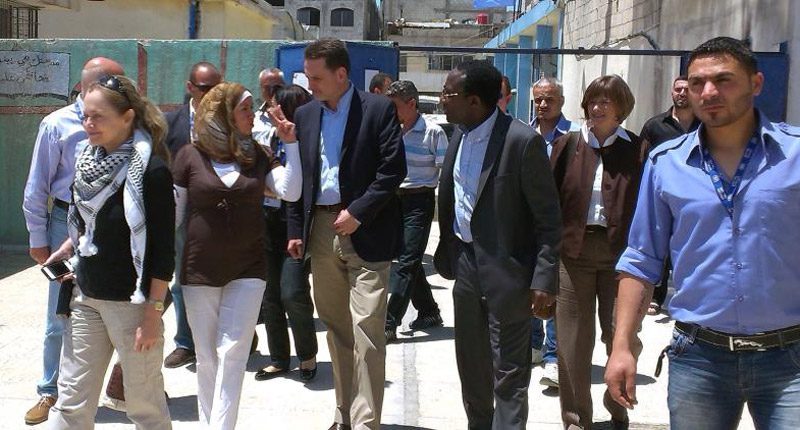 Commissioner-General of the UN Relief and Works Agency for Palestine Refugees in the Near East (UNRWA) Pierre Kr?henb?hl (third left) on a visit to Homs, Syria. Photo: UNRWA

A senior United Nations official has highlighted the extreme hardship faced by Palestinian refugees in Syria as a result of the ongoing armed conflict, and stressed the need to improve conditions to enable the delivery of critically-needed humanitarian assistance.

?Many refugees had, often overnight, lost everything from their homes, their livelihoods, their businesses and their hopes. In their families, they had confronted death, injury and disappearance,? said Pierre Kr?henb?hl, the Commissioner-General of the UN Relief and Works Agency for Palestine Refugees in the Near East (UNRWA).

?As another generation of Palestinians experiences the trauma of displacement, their situation has become, in human terms, nothing short of catastrophic and yet is often being overlooked,? he added during his visit yesterday to Syria to see for himself the suffering of the Palestine refugees and to advocate for expanded humanitarian access.

?The critical imperative is improved conditions to deliver the much-needed assistance to affected refugee communities. All parties must understand that safe, uninterrupted and substantial food distributions must become the norm,? said Mr. Kr?henb?hl.

?UNRWA must be allowed to provide medical supplies, hygiene items, water and other essential humanitarian supplies to civilians in Yarmouk, as well as in several other embattled camps and locations in the country.?

Efforts by the Agency to deliver critical supplies, including food and medicine, to approximately 18,000 civilians trapped in the Yarmouk refugee camp have been repeatedly thwarted, as recently as yesterday.

UNRWA, as well as senior UN officials, has consistently demanded that all parties cease hostilities and seek to resolve their differences exclusively by peaceful means, and that continuous, substantial and safe humanitarian access to the camp is ensured.

In Homs in central Syria, the Commissioner-General visited UNRWA installations and met Palestine refugees who have been exposed to a multiplicity of traumas over the past three years.

In his interactions with displaced refugees now housed at two UNRWA schools in Jaramana camp in Damascus, Mr. Kr?henb?hl listened to their stories of hardship and their feelings of loss and uncertainty. He pledged that UNRWA would continue to make every effort to support and assist Palestine refugees in this time of acute vulnerability.

He also expressed gratitude to UNRWA staff for their commitment and for selflessly taking great personal risks to provide assistance to the refugees, often putting aside their own personal experiences and tragedies.