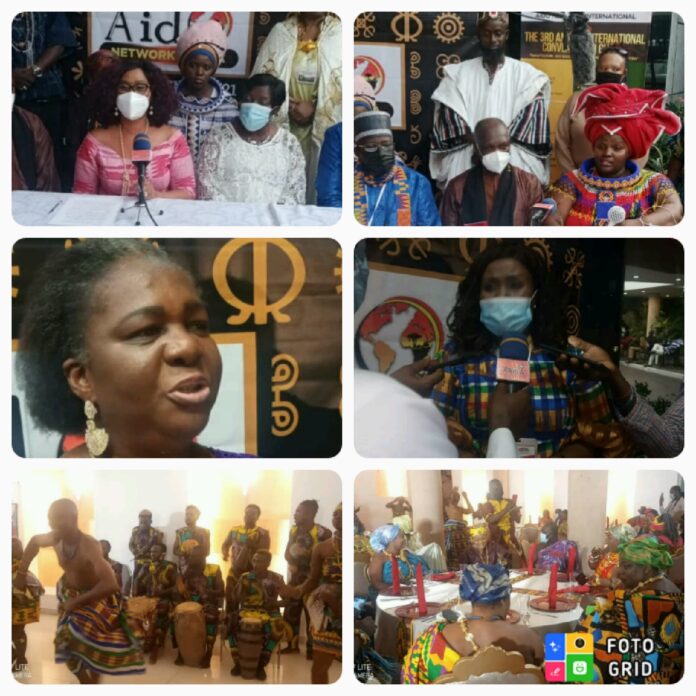 AIDO Network International has organised its 3rd annual convention in Accra with the ultimate aim of promoting culture and unity among Africans.

The event which was held under the theme: Culture and Business Uniting Africa and Her Diaspora” attracted over nine countries representing the NGO.

Ambassador Namboka Omositson, Vice President, AIDO addressing the media explained that the NGO is a culture–based Organisation with the objective of reviving the valuable original traditional values and norms which guided the African prior to the arrival of Western Culture.

This he said, AIDO has arrived at the conclusion early this year that Mother Africa needs to rethink the past to build a different image of itself and the rest of the world.

“With a mission to improve the lives of ordinary people by reviving a sense of self-dignity, hard effort, and confidence, we choose to collaborate with elders and traditional leaders to encourage local initiatives and talent.”

Our view is that the past half-century of predominantly modern state-led efforts needs to be significantly complemented by society–based initiatives such as AIDO.

The above history outlines our long-term approach to what we hope to accomplish: promoting culture and heritage, exploring, networking, and beginning commercial, business, investment, and entrepreneurship inside particular countries.

The Founder and Chairman of the 6th Regional Global Chamber of Commerce Dr. Melida Harris Barrow, in her presentation, entreated Africans to unite in order to help develop the continent.

She also admonished Africans to discard the mentality that they are impoverished, claiming that the continent is rich in natural resources.

The Executive Director of Aido Network Ghana Lady Rev. Dr. Abena Tay also noted that the conference focuses on empowering individuals from all walks of life to understand who they are and where they originated from.

This, she claimed, would help them appreciate and embrace their culture. It’s past time for us to stop adopting identities and start referring to ourselves as true Africans.

In addition, the conference will also pave way for investment opportunities, business networking, and also exhibitions.

The Organizing Director for AIDO Network Ghana Rev.Dr. Nanayaa Owusu –Prempeh, also underscored the need for parents to cultivate the habit of raising their kids by communicating with them in their native languages.

According to her, the child will grow to understand his identity and will be equipped with adequate knowledge of his culture to pass it on to the next generation as a result of this.

Tropical Storm Elsa lashes Jamaica as it moves toward Cuba