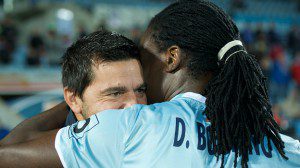 Boateng has emerged strongly on the radar of the European outfit after he revealed his desire to return to the club.

AIK in Stockholm are moving quickly to replace Ghanaian midfielder Ebenezer Ofori who is set to leave the club in January.

Ofori impressed heavily last season where he emerged the Best midfielder in the Swedish Allsvenskan league.

The European outfit have resolved to sell their prize asset to free space for the potential return of his compatriot Derek Boateng.

This will be a hammer blow for some of the Spanish club, who have held a long-term interest in the retired Ghana international.

Roberto Carlos exclusive: the Global Ambassador for Football for Friendship answers the questions of Young Participants from all over the world

Nursing profession should be exclusive right for girls – Chiana Pio