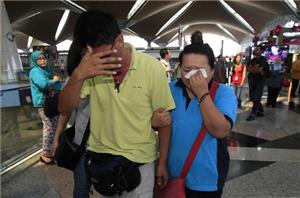 Malaysian authorities were looking into the ?possibility? that an airliner which vanished with 239 people on board had attempted to turn back, the country?s air force chief said on Sunday. Authorities also said they were expanding their search for wreckage to the west coast of Malaysia. Searches so far had concentrated on waters to the country?s east, in the South China Sea.

?There is a distinct possibility the airplane did a turn-back, deviating from the course,? said General Rodzali Daud, citing radar data.

?One of the possibilities is that it was returning to Kuala Lumpur.?

Malaysian Airlines flight 370 vanished early Saturday, with the last known location of the Boeing 777-200 recorded over waters somewhere between Malaysia and southern Vietnam.

No debris has yet been found though Vietnam has said its search planes spotted oil slicks near where contact with the plane was lost.

Rodzali said a turn-back was ?corroborated by civil radar?, giving no further details.

?When there is an air turn-back the pilot would be unable to proceed as planned,? he said, adding authorities were ?quite puzzled? over the situation.

On authorities expanding the search operation to Malaysia?s western coast, facing the huge Indonesian island of Sumatra, Rodzali, the air force chief, said Malaysia had ?requested our Indonesian friends to assist us in that matter?. In a related development America?s Federal Bereau of Investigation (FBI) is sending agents and technical experts to assist a team probing the disappearance of a Malaysia Airlines jet that had several Americans aboard.

US officials told The Los Angeles Times that they are trying to determine whether there was any terror link to what caused Flight 370 to go missing as it carried 239 people from Kuala Lumpur toward Beijing.

The fact that at least three of the passengers are believed to be Americans ?gives us entree? to the case,? a top federal law enforcement official told the newspaper.

?But so far, what happened is a mystery.?

A US official told CNN that FBI agents stationed at the American Embassy in Kuala Lumpur, including an FBI legal attache, were monitoring the situation closely.

Asked to confirm the reports, an FBI spokesman only replied: ?We are ready to assist if needed.?

Although two passengers appeared to have been using stolen EU passports, ?there is no indication this is a terrorist attack; stolen passports are certainly not indicative of a terrorist attack,? a senior counterterrorism official told the Times.

The official stressed there was ?no evidence? of terrorism thus far.

According to the federal law enforcement official, FBI personnel will help review video of the Kuala Lumpur airport for images of passengers at the ticket counter, security sections and the boarding area. The agents would then use counter-terrorism technology to find any possible matches with known members of Al-Qaeda or other terror groups.

And the US National Transportation Safety Board may also join the investigation ?because the jet was built by Boeing in this country,? the law enforcement official said.

The stolen passports used by two passengers on the plane are believed to have come from an Italian and a an Austrian.

?Just because they were stolen doesn?t mean the travellers were terrorists,? a Department of Homeland Security official said. ?They could have been nothing more than thieves. Or they could have simply bought the passports on the black market.?