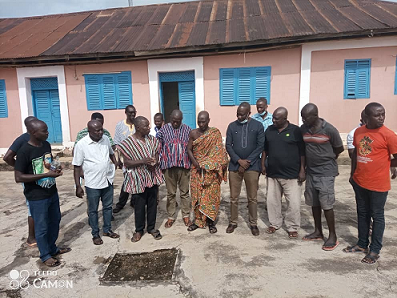 The President’s nominee for Kadjebi District Chief Executive (DCE) position, Mr. Wilson Agbanyo (AKA Sapato) has been introduced to the chiefs in the eight paramountcy of the District.

The visit organised by the Akan Constituency Executives of the New Patriotic Party (NPP) was to ask for the chiefs’ blessings and prayers for his confirmation.

The Nanamon in the areas they visited prayed for the nominee for confirmation, wished him well and also advised him to identify the avalanche problems that bedevilled the District and find a lasting solution to them.

The chiefs tasked him to do more than enough to make sure that Kadjebi District saw significant improvement in socio-economic development of the people.

This was contained in a release signed by Mr. Worlanyo Adjei, the Constituency Assistant Secretary, and copied to the Ghana News Agency (GNA).

He said the chiefs also advised him to be circumspect in handling issues and use bi-partisan approach in handling affairs of the District.

The Assistant Secretary explained that the chief said even though he was appointed by the NPP government, when he assumed office, he should see himself as the people’s representative but not his Party’s.