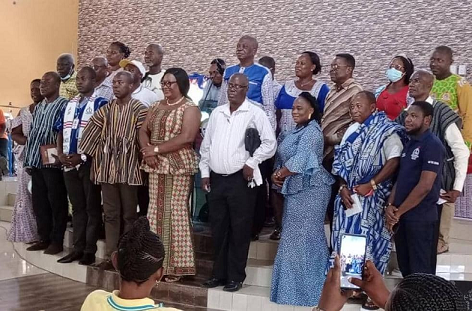 The Akatsi South Municipal branch of the Ghana National Association of Teachers (GNAT), has re-elected Mr Prosper Agbeli, Headteacher of Avadre EP Basic School as its Chairman for the next four years.

At its 6th Quadrennial and 53rd delegate’s conference at Akatsi, the Association also elected Mr Atsugah Raymond, as Vice Chairman.

In his welcome address, Mr Agbeli said the four-year term under his administration was met with struggles, a constant abuse of the classroom teacher, challenges faced by teachers, intimidation, attacks, and threats, among others.

However, Mr Agbeli said, “those situations give us the experience to confront the challenges as and when they arise.”

Mr Agbeli lauded his colleague executives for the successes chalked over the past four years at both Municipal and local levels and pledged to move GNAT to higher heights.

Mr Agbeli pledged to maintain the trust reposed in them as leaders, saying “we cannot betray the teacher for a pittance.”

He urged teachers to be bold and courageous in their struggle to ensure that the teacher was respected and regarded as the true bedrock for national development.

Madam Philippa Larsen, National President of GNAT, promised to put up a Secretariat to champion the affairs of the Association in the area.

She appealed to members to exhibit maximum support to the new leadership in moving the union forward.

Mr Leo Nelson Adzidogah, the Municipal Chief Executive (MCE) of Akatsi South, on his part, affirmed that “members of the union play a key role in assisting the government to manage matters of education.

“GNAT helps the government of the day to carry out many projects and reforms in the education sector,” he said.

It was on the theme: “Surviving as a reliable and vibrant teacher Union in the 21St Century, the role of Akatsi District GNAT members.”