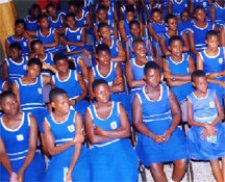 Mr James Gunu, Akatsi-North District Chief Executive (DCE) has announced the creation of a special fund by the Assembly in its 2016 budget to boost girl-child education in the area. He said the Assembly placed high premium on girls? education as a measure of arming them to confront the challenges faced by women in society.

Mr Gunu was addressing a ceremony to welcome the First Runner up of the 2013 Ghana?s Most Beautiful (GMB), Miss Juliana Bubune Tititia, who visited the area on Tuesday.

The visit of the 26-year-old Beauty Queen would serve as a role model by way of encouraging girl-child education in the face of the many pitfalls they faced, including early motherhood.

The DCE said an assessment had been put in place to review the performance of Area Councils in area based on girl-child education, revenue mobilization and sanitation, to wake up the people in the communities to their roles.

The DCE asked the 2015 BECE candidates not to be lazy around, knowing that there was now the opportunity to re-take the exams.

He said members of the Girls Education Club would be taken on a tour of Parliament as motivation.

Miss Titiati who hails from the Volta Region advised the pupils to remain humble, hardworking, respectful and shun bad company.

She also asked education stakeholders to help fight early pregnancies in the area.

The Beauty Queen donated exercise books and writing materials to deserving pupils from the five Area Councils and members of the Girls Education Club.

More employment opportunities in EMA for the youth