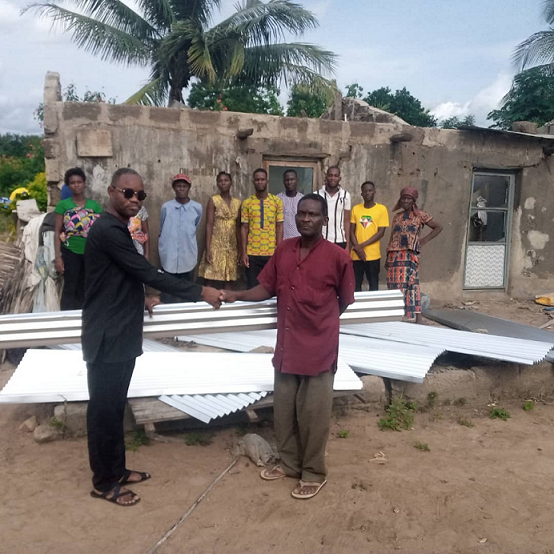 Residents of Adidotinu within the Akatsi North District of the Volta region, who were affected by a rainstorm last March, have received relief items to augment their plight.

Mr William Kpormatsi, former Akatsi South Parliamentary primaries aspirant of the National Democratic Congress (NDC) who supplied the relief items said it was worth over GHC5000.00.

The items included packets of roofing sheets, bags of rice, and oil.

Presenting the items, Mr Kpormatsi, who is also a private businessman, said the rationale behind the gesture was as a result of a story the Ghana News Agency (GNA) published in March, which saw Tsakawo Moses, a 21 year old pupil of Agbondo Basic School dead through electrocution as a result of the rainstorms.

Mr Kpormatsi urged the victims to embark on tree planting to protect buildings against rainstorm.

He promised the victims of his continuous support till things got better.

Mr Moses Agbanaglo, Secretary to Togbe Badasu III, chief of the area who received the items on behalf of the affected victims, expressed gratitude to Mr Kpormatsi for the love shown.

“On behalf of my Chief and the good people of Adidotinu, we extend our warmest appreciation to you for this great gesture.”

Mr Benjamin Agbanaglo, a 26 year old disaster victim who had the roofing on his two rooms entirely ripped off, appealed for more support from other individuals and organisations.

The impact of the floods have rendered some residents, many of whom are farmers including school pupils homeless.