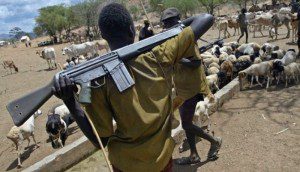 The Akatsi North District Assembly of the Volta Region has served notice to soon flush out Fulani herdsmen and their animals from the area. According to the DCE for the area James Gunu, the issue of the herdsmen and their animals was gradually growing into a menace for the country, emphasizing the need for the assembly to be proactive to protect farms.

He indicated that the people in the District were mainly farmers whose farms were sometimes destroyed by the Fulani herdsmen and their cattle.

Mr Gunu warned that those who invite herdsmen to settle on their land will be surcharged for any damage caused to any farm or harm to any farmer, including rape of women by such herdsmen.

The DCE disclosed that the Assembly since its inception about four years ago grouped cattle owners and local Fulani herdsmen into the Akatsi-North District Cattle Owners and Herdsmen Association for easy management but will not accept the itinerant herdsmen.

Mr. Gunu said the Assembly was “fast-tracking development in the young District” and has launched an operation ‘One Month One Project’ exercise to commission at least one completed project every month.

He was speaking when he commissioned two separate six-unit classroom blocks at Agormor-Agado and Afiadenyigba-Gborxoxome.

The DCE presented 10 poly tanks for the storage of clean water to 10 schools, where the Assembly was funding its own School Feeding Program (SFP).