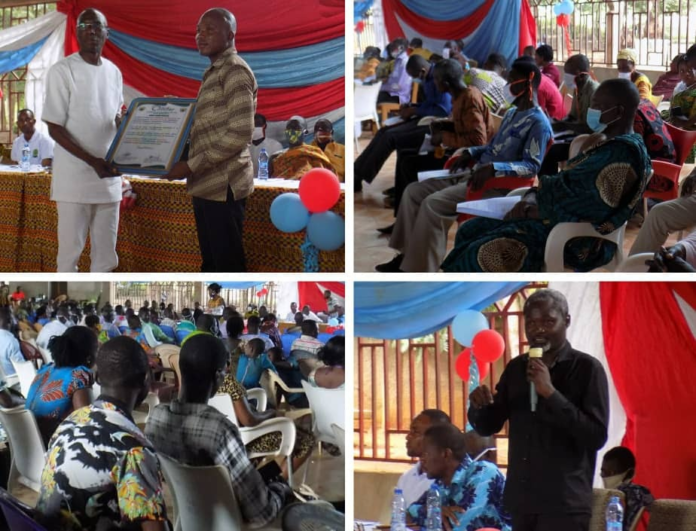 The Akatsi North District Assembly has presented awards and citations to deserving teachers, non-teaching staff and Schools that clocked 100 per cent pass in the BECE in the district to mark this year’s Teacher’s Day.

A total of eight teachers, who came first and second in the Kindergarten (KG), Primary, Junior High School and Senior High School (SHS) categories each received a certificate and a flat-screen television set and fridge, respectively.

The non-teaching staff, who came first and second, took home the same prizes.

Eight schools that recorded 100 per cent pass in the 2019 Basic Education Certificate Examination (BECE) received a certificate and two dustbins (large size) each.

The tutors at the Ave SHS, the only senior high school in the district, were presented with citations in recognition of their hard work in ensuring that the students recorded a 100 per cent pass.

This was at an awards ceremony and teachers’ durbar held to honour teachers, educational workers and schools as part of this year’s World Teachers’ Day celebration.

The celebration on the theme: “Teacher Leadership in Developing Crisis Education Responses,” was attended by heads of departments, chiefs, the Clergy, officers from the Education Office, school heads, teachers and teacher unions.

Dr Prince Sodoke Amuzu, the District Chief Executive for Akatsi North, congratulated the teachers for their services in improving education in the district and assured them of the Assembly’s support to deliver effectively for the good of the district.

He attributed the success in the education sector to the awards ceremony and the existing collaboration among stakeholders.

He called for the continued support to raise the standard of education and called on teacher unions to take responsibility, bring out new ideas to solve problems, saying, “good leadership starts with an honest conversation on issues affecting teachers.”

Mr Peter Nortsu-Kotoe, the Member of Parliament for the area and Ranking Member on Parliament’s Education Committee, asked teachers to be proud of the profession they had chosen and to make their impact felt everywhere.

He admitted the condition of service for workers under the Ghana Education Service was not rewarding as compared to other Services, which had numerous allowances, including risk, hazard and medical and urged them to “be hard on your teacher unions” to negotiate better deals for members.

Mr Saviour Vikpornu, a graduate teacher at Dzadzepe E.P. Basic School, who came first at the KG category, expressed gratitude for the recognition and linked his success with teaching the little ones, to years of service as a Sunday school teacher in his church.

He called on the government to consider providing teaching and learning materials at the KG level, citing reluctance of parents to perform this duty.

He said, “When the foundation is well laid, you can be assured of a strong building.”