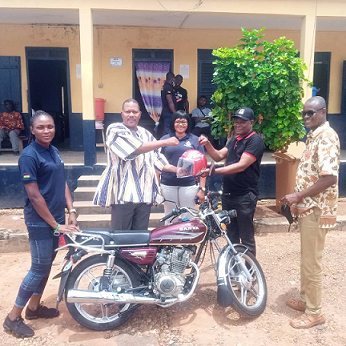 Mr Leo Nelson Adzidogah, the Municipal Chief Executive (MCE) for Akatsi South in the Volta region, has handed over a Sanya branded motorbike to the Domestic Violence and Victim Support Unit (DOVVSU) of the Ghana Police Service at Akatsi.

The move was part of the measures taken by the Assembly to assist the police to up their game in ensuring the security and timely response to cases of domestic violence in the Municipality.

Presenting the motorbike, Mr Adzidogah stated that the gesture would also enhance swift response in visiting crime scenes, “especially in areas that would be difficult to access with car”.

He further said as the head of security in the Municipality, he is aware of the challenges the security agencies were confronted with in the discharge of their duties, “so the assembly is working hand in hand with you to have some of these challenges solved”.

Chief Superintendent Joseph Atsu Dzineku, the Akatsi South Municipal Police commander who received the offer on behalf of DOVVSU, thanked the MCE and his entourage for remembering them in their difficult times.

Detective Sergeant Patience Dzihlornu, the in-charge at DOVVSU, after she was handed over the motorbike, promised to take good care of the bike.

She said the donation would boost their activities of ensuring issues of domestic violence were dealt with.