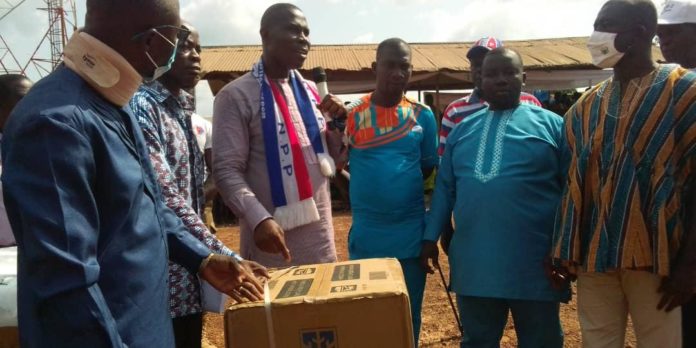 Mr Alex Djornobuah Tetteh, the Member of Parliament for Sefwi-Akontombra constituency, has rewarded 27 public and private school teachers and five nurses in the constituency for their outstanding services.

The teachers were selected from the 15 circuits in the district and the nurses from selected Community-Based Health Planning and Services (CHPS) Compounds in the area.

The MP, who is also the Deputy Western North Regional Minister, gave out eight table top fridges to the Nsawora and Akontombra branches of the Ghana Private Road Transport Union (GPRTU), 1,000 Plastic chairs and a sound system to be used during community durbars.

He also presented eight wheelchairs and medical items to the Akontombra District health directorate.
Mr Tetteh said the award was to motivate the teachers and nurses in the area to give of their best as others were not willing to accept postings to the area.

He said he would continue to seek the welfare of teachers and nurses by prioritizing their accommodation.

He said the award scheme would be extended to other sectors and asked the electorates to renew his mandate and that of President Nana Addo Dankwa Akufo-Addo to enable them to continue with the good works already started.
He called on the electorates to embrace peace before, during and after the December polls.

Mr Stephen Kwaku Owusu, the Western North Regional Director of Education, commended the Member of Parliament for recognizing the efforts of teachers and health workers in the area.

“This significant recognition I believe will motivate other government workers in the area to work hard thereby improving the quality of teaching and health care delivery,” he said.

He commended Nana Addo Dankwa Akufo-Addo led government for improving education in the Region, saying the District Director of Education and Circuit supervisors now have the needed logistics to work with.

The Regional Director advised teachers to be disciplined in the discharge of their duties.