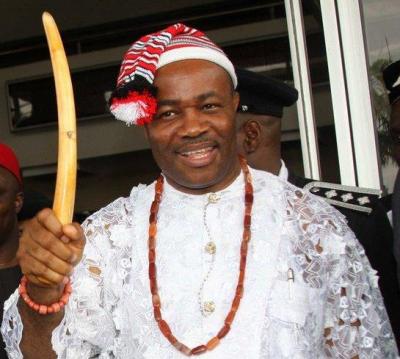 Asides music, his first love, Dear Kelly also horned his skills as the pioneer presenter and producer with Muzik Alive and Gold Weekend TV show on AKBC TV before leaving for South Africa where he joined Planet Image Production. In this exclusive interview, the Showbiz Royalty sheds light on his sojourn in South Africa, his trip back home to Nigeria, music and sundry issues.

Excerpts;
Welcome home. What have you been up to in South Africa?

Thank you.
Basically it has been Music & Media.
I had been working closely with my professional colleagues at Planet Image Production & Good Morning Africa.I have shot two new videos, one in Lagos and one in Johannesburg, South Africa.

Why are you in Akwa Ibom, Nigeria?

I have been home to contribute my quota to the electioneering process. And to lay plans for proper celebration of the out going Governor.

You recently released a video for your song ‘Missing You’ and fillers have it that you shot another video in South Africa. How do you feel about that?

I’m excited. The video for ‘Missing You’ has been long overdue,and I feel good about it, the video was shot at choice locations in Lagos, it premiered on SoundCity TV & Hip Tv.
After which I shot the video of my single ‘Round The World’ in Johannesburg,when released, it is a video that will wow every viewer, having a cameo appearance by a South African act I don’t wanna disclose yet.

I am happy about the outcome of the event, hosting cultural troupes from nine (9) states was a feat I consider the high point of the event.
I have always been passionate about the overall development of the entertainment industry, I have personally been making attempts to partner with the state Ministry of Culture & Tourism since the days it was just a bureau.
I am grateful to the NDDC,especially the MD, for throwing their weight behind the project. It truly echoes the commission’s commitment to youth development, cultural unity, social balance in the region.

The emergence of the Face of Niger Delta 2014

We did our very best to keep up our reputation to avoid regular trials and controversies that surround most pageantries.

We employed several professionals in the process and we had to go round the nine states of the Niger Delta for auditions for Face of Niger Delta 2014.
The Abia state representative won on merit. Working with Victoria Ubani-Face of Niger Delta 2014 has been interesting and fascinating, with her, we are taking steps towards the actualization of the Niger Delta of our dreams through her pet projects.
So far, in the spirit of the season, she successfully launched her campaign against violence during elections, a project she calls ‘WAVE- Women Against Violent Elections’ in Niger Delta. She has also hinted the public about her ‘Education is Key’ campaign, advocating for the the need of girl child empowerment through education. All of which came on the heels of her induction into African Women Leaders Organization (AWLO) an association of women across Africa, effecting change in their immediate society, to better the lot of the female gender.

What are your plans for Face of Niger Delta 2015?

Wow. I don’t want to let the cat out of the bag, we have our hands full with Miss Victoria Ubani’s projects.

The epoch making event is its 4th edition, and we have rebranded it, and named it ‘Niger Delta Festival of Artsusual, it is packaged to be a world class event tailored with contemporary elements enough to woo local, National and International interest.
The concept, Niger Delta Festival of Arts & Culture is drawn from
a sincere attempt to harness the arts and cultural endowments of the
Niger Delta as a vehicle for unity, social balance and tourism development in the region. It will feature Cultural Expo, Face of Niger Delta (cultural pageant), Fashion Showcase, Arts & Craft Exhibition and Symposium &Workshop.
Participants and Contestants are drawn from across the nine Niger Delta states; Rivers, Bayelsa, Delta, Edo, Akwa Ibom, Abia, Cross River, Imo and
Ondo States.

What’s your take on Akpabio’s performance in the entertainment sector?

Governor Akpabio has done his best, he has laid a good foundation, and he has carried entertainers along.
I appreciate him personally, I had officially announced a concert I am planning ‘Labour of Love Concert & Awards’ and preparations are in top gear for the hosting of a world class event as a ‘Thank You Concert’ in honour of the Uncommon Transformer; Chief Barrister Godswill Obot Akpabio, for keeping the promises he made to Akwa Ibom people 8 years ago.

How do you rate government support for the entertainment and tourism industry?

Below average. I say so because in South Africa, the government have been able to identify talents, and understand entertainment to be a high income earner for youths, so they establish academies for talent development. In Nigeria, we had to wait till recently when entertainment helped to raise our gross earning.
I also think we have to jointly fight piracy, we are yet to win the fight against piracy, if we can, then talents will reap the fruits of their labour.

How are you contributing to entertainment/talent development?

My company produces and promotes alot of talents, my plan this year is to export talents so they can compete favourably on the international scene, like James Okon who is dong exploits in South Africa.
My company is also venturing into Nollywood full time, we are on location in Akwa Ibom for the shoot of the movie ‘Dat Uyo Boy’, through these, we are discovering new talents for Nollywood, and encouraging home based movie producers.

Labour of Love Concert-How did you come about the concept and name?

Na God o. (Laughs)
Labour of Love Concert is not a campaign strategy, but a sincere effort towards showing heartfelt appreciation to the Governor whom during his tenure, has redefined the hopes of Akwa Ibom people, and has repositioned the perception of the Akwa Ibom brand in the global community.
We just wanna say ‘Thank You’ to a man who has changed the fortunes of Akwa Ibom people. I live in Johannesburg, and I have traveled around the continent, I have felt the impact of his works even abroad. Even in my office in Johannesburg, from thev day I told them am from Akwa ibom in Nigeria they all call me Akpabio and am proud of him.

What contents will make the event?

Superlative performances and Spectacular renditions from several personalities. Top Nigerian celebrities are already in high spirits to grace the occasion from all over the country and beyond.
In addition to that, since the Governor’s delivery of democracy dividends is a product of his love for his people, and he did not achieve the feat alone, thus, the event shall also feature awards to ‘Soldiers of Love’ who played significant roles in the 8 years administration of Uncommon Transformation.
Through the concert, we hope to pass a message that truly, Akwa Ibom people love Godswill,at home and abroad, and they have decided in their heart to celebrate his personality and ideology.

Make money and settle down… Laughs

Thank you for your time. Hope to see you again soon.