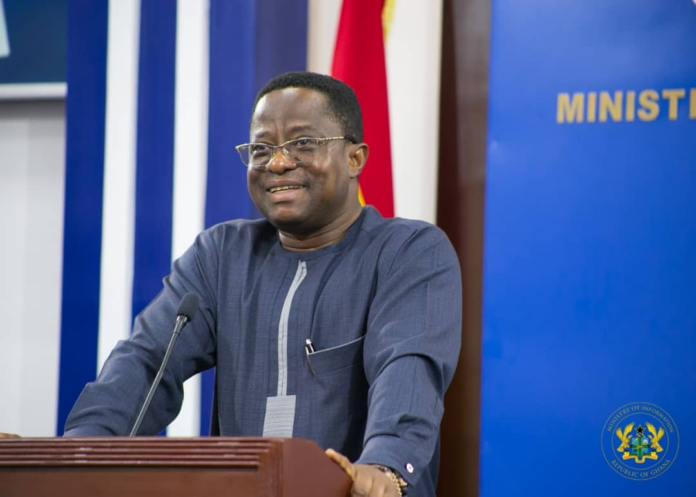 President Nana Addo Dankwa Akufo-Addo, has described Mr John-Peter Amewu as an outstanding Minister in government and an excellent candidate for the country’s Parliament.

“Hohoe has got an excellent candidate, one of the outstanding Ministers of the government of Nana Addo Dankwa Akufo-Addo. He was very good as a Minister for Lands and Natural Resources and has been a brilliant Minister of Energy.”

President Akufo-Addo who addressed traditional, religious and Party faithful during the Campaign and Manifesto Launch of Mr John-Peter Amewu, the New Patriotic Party (NPP) Parliamentary Candidate (PC) for the Hohoe Constituency, said Mr Amewu has been “the man who has kept the lights on in the country.”

He said Mr Amewu who has not been a Member of Parliament (MP), had undertaken many development projects in the Constituency, adding that “add MP to the Minister and you will see the rapid transformation of Hohoe.”

President Akufo-Addo noted that the “umbrella had dominated the politics of the Volta Region in the fourth Republic. What is the nature and what are the results?

“And what is the progress the Volta Region has seen under the umbrella? Zero, zero, zero absolutely zero…the almost four years of the elephant reign in the Volta Region, already we are seeing the changes that have taken place in the Region.”

“Because the elephant has come to bring progress and development to our country. The New Patriotic Party has a blueprint for the development of Ghana, and I am inviting you to join the Party.”

The President reiterated his position as determined to marry the Volta Region adding that he was the suitor who would keep on knocking until “the young lady opens the door and say now, you can come in as a result of persistency and consistency.”

Mr John-Peter Amewu, the Parliamentary Candidate, urged the electorate to vote with an aim of changing their destiny and the celebration from their votes cast should be an everlasting one.

He said his aim of helping traders to start and expand their businesses was essential one and would do everything possible to help the women as well as offer employment opportunities to the youth.

The Parliamentary Candidate pledged the commitment of President Akufo-Addo to the Constituents to improving the lives of citizens, when voted for as the next MP of the Constituency.

Mr Makafui Woanya, Volta Regional NPP Chairman, said the December polls would be about human and infrastructure development and not on party basis.

He urged the Party faithful and electorate to become disciples of good governance of the NPP.

“Don’t be deceived, we are voting for development and not on Party lines,” he said.

Mr Sammi Awuku, NPP National Youth Organiser, on his part said, the December polls would be a choice between poverty and prosperity, forwardness and backwardness as well as a choice between competency and incompetency adding that “we have worked so hard and fulfilled our promises.”

Mr Kwasi Amoako-Atta, Minister of Roads and Highways, urged electorate not to make any mistake, which could be irreversible on December 7, describing the date as the most important in every four years.

He said it was time for citizens to use their thumbs to thank God and the President for all the good works they had enjoyed.

The Road Minister noted that the Hohoe Constituency and the Volta Region would be beneficiaries of many road projects and failure to retain the Party to power, would retard the country’s development.