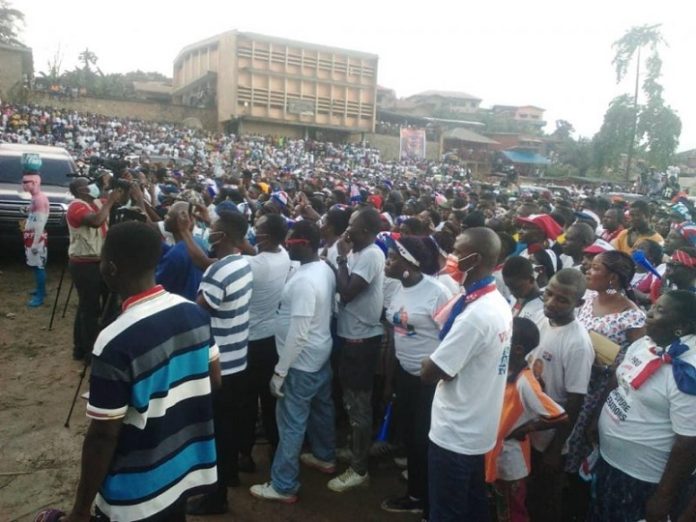 President Nana Addo Dankwa Akufo-Addo, the Presidential candidate of the New Patriotic Party (NPP) on Sunday received tremendous reception when he visited the Tarkwa-Nsuaem Constituency of the Western Region.

The President who was in the area to meet with the party stalwarts in the constituency later addressed a large gathering at the Tarkwa Community Park.

He also addressed cheering crowds at the Ahanta West and Prestea-Huni Valley Constituencies before arriving at the Tarkwa Community Park.

The President cautioned party members against ‘skirt and blouse voting’, a term used for voting for a presidential candidate and not for the parliamentary candidate of the party or vice versa.

He emphasized that the NPP was working hard to win a landslide victory in both the presidential and parliamentary elections but would not be able to do so if some members, supporters, and sympathizers of the party vote ‘skirt and blouse’.

Mr Kwabena Agyapong, former General Secretary of the NPP touted the achievements of the NPP as unprecedented in the history of Ghana for which reason the electorates must retain the government of President Akufo-Addo.

According to him, the people are living testimonies of the hard work and competence of the Akufo-Addo led government as their children enjoyed free senior high schools.

Papa Owusu Ankomah, Ghana’s Ambassador to the United Kingdom (UK) recounted the situation where foreign diplomats have been praising the Akufo-Addo government on its social intervention policies.

He said Ghanaians should not buy into the lies of the main opposition party, the National Democratic Congress (NDC) who had nothing better to offer and were kicked out of government.

Mr Allan Kyerematen Minister of Trade and Industry indicated that the election was very important to the NPP though the people have resolved to retain President Akufo-Addo to do more for them, however, there was the need to give victory to the NPP.

He said all the 2016 electioneering campaign promises made to Ghanaians have been fulfilled, hence the need to maintain the NPP government to continue the good work to improve upon the quality of life for the citizens.