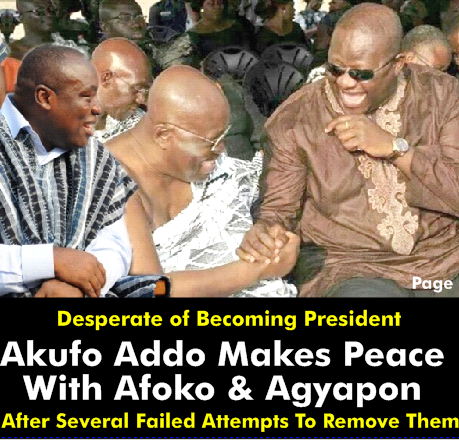 Having woefully failed in his bid to oust Paul Afoko and Kwabena Agyapong as National Chairman and General Secretary respectively, of the opposition New Patriotic Party, and recognizing how his continuous hounding of the duo could hurt his chances of becoming president after the 2016 polls, Nana Akufo-Addo is reported to have finally given up on the two estranged national executives.

Party insiders have disclosed to The aL-hAJJ that the twice defeated presidential candidate of the NPP has finally appreciated his folly in his attempt to use his controlling forces in the leadership of the opposition party to antagonize and alienate the National Chairman and General Secretary, with the hope of getting rid of them, and has therefore, decided to embrace them in order to consolidate his childhood dream of becoming president of Ghana.

To ensure that his new dalliance with Paul Afoko and Kwabena Agyapong is carried through to the latter, a source close to the NPP?s 2016 flag bearer told this paper that, Nana Akufo-Addo has warned all his acerbic mouth loyalists to cease fire in their attacks on the two most abused national executives.

?Nana has sternly cautioned founding member of the NPP, Ayisi Boateng; member of National Council of the party, Dr AmoakoTuffuor; Member of Parliament for Assin Central, Kennedy Agyepong and Wontumi, the Ashanti regional chairman and other foul-mouth loyalists who have consistently attacked Paul Afoko and Kwabena Agyapong to put an end to it immediately,? the source revealed.

This uncompromising fatwa to the Paul Afoko and Kwabena Agyapong attackers, party sources say, could have informed Sir John?s recent remarks on Accra based radio station, OK Fm, encouraging party supporters to support the General Secretary (after previously abusing him at the least opportunity as the worse thing to ever happened to the NPP) and all other elected officers of the party to enable them discharge the arduous duties imposed on them.

Host of Ok Fm?s morning political show, Kwame Tikese, just as listeners of the station, may have been astound last Friday hearing Sir John declare “I am appealing to all our members to allow our elected national officers the needed cooperation to execute their mandate so that 2016 will be ours for the taking”

According to the acidic mouth former general secretary of the largest opposition NPP; “I have contributed my part as one of the best GS of the party. The mantle has now fallen to Kwabena and I think we should all give him the necessary support… it?s unfortunate when one does nine good things but falters on one, we most often only concern ourselves with the one unfortunate incident.”

In yet the clearest indication of dropping his aggressive and uncompromising stand on the two most vilified national officers of the elephant party, Nana Akufo-Addo was recently reported to have directed his once most trusted attorney in the NPP, Lawyer Phillip Addison, (who had called on him to intervene in the controversial Klottey Korley Parliamentary primaries which, he miserably lost) to use the party?s structures and therefore, directed him to send his petition to Kwabena Agyapong, the General Secretary.

Nana Akufo-Addo was again last week, and for the first time in many months, spotted together with Kwabena Agyapong at James Town for an outreach program.

Again, over the weekend, the embattle general secretary, Kwabena Agyapong was to accompany the bigheaded 2016 flag bearer of the NPP to Akuapem to mourn with Okuapenman on the loss of their overlord, Oseadeeyo Addo Dankwa III.

Nana Akufo-Addo is also expected, for the first time in many months, to jointly address a press conference today together with Paul Afoko, Kwabena Agyapong and Dr Bawumia on the supposed bloated electoral register.

As a result of this new overtures, some of the NPP 2016 flag bearer?s trusted assigns, including the likes of National Treasurer, Kwabena Abankwa Yeboah, who had been riding on the back of Nana Akufo-Addo?s solid support in the party to disrespect the duo, has also now began to yield to the dictates and command of the duo (more on that soon).

Nana Akufo-Addo and his loyalists, prior to the election of Paul Afoko and Kwabena Agyapong as National Chairman and General Secretary respectively, have tagged them as nemeses of his (Akufo-Addo?s) 2016 presidential bid.

Until recently, the duo have been berated and hounded over claims they are in cahoots with the ruling National Democratic Congress to deny Nana AkufoAddo victory in the next presidential election.

As a result, the 2016 flag bearer of the party was reported to have tasked his controlling assigns in the leadership of the party do everything within their power to have the duo impeached.

But Akufo-Addo and his acolytes had the shock of their lives when the party?s World Bank, Ashanti, and the Brong Ahafo regions scuttle that move to impeach Paul Afoko and Kwabena Agyapong, rendering the whole exercise futile.

As a result, party sources say, Nana Akufo Addo was left with no option than to back down on his diabolic agenda and, has finally decided to make peace with the two, even if grudgingly.

What is said to have also pushed Nana Akufo-Addo to compromise his previously entrenched stand; to humiliate Afoko and Kwabena Agyapong, a source has revealed, is the impending National Executive Committee and National Council meetings where he (Nana) is expected to name his campaign team and present his strategies for the 2016 polls. AkufoAddo is also expected to rally all party kingpins to call for absolute unity within the rank and file of the party to ensure victory in 2016.

Another reason for Akufo-Addo?s capitulation, according to reports available to The aL-hAJJ is that, Nana Akufo-Addo is also mindful of the constitutional role of the National Chairman in conjunction with the General Secretary in convening all meetings of the party, as well as, the processes of correspondence between the party and other relevant bodies and stakeholders, hence, the unexpected summersault. Stay tuned.