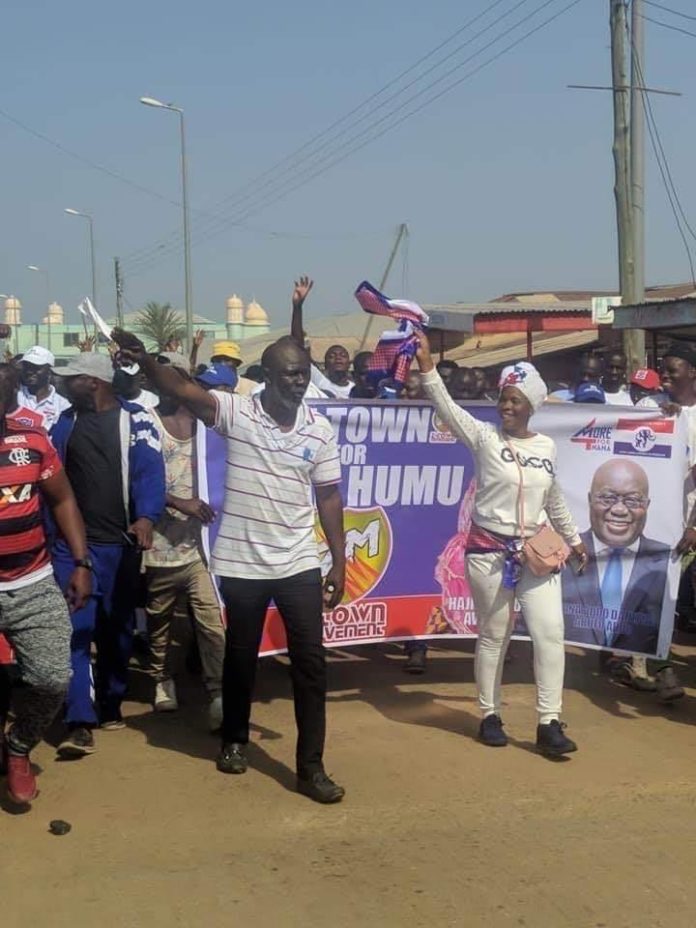 Mr Sammi Awuku, the National Organiser of the New Patriotic Party (NPP) has assured the people of Wa Central Constituency that President Akufo-Addo will show Hajia Humu love if they elected her as their Member of Parliament (MP) come December 7.

He explained that the love that would be shown her by President Akufo-Addo would put her in a position that she could attract more development, scholarships and jobs to the people of Wa Central in a manner they have never experienced before.

Mr Sammi Awuku who was addressing Party supporters in Wa after a peace walk organised by the Constituency branch of the Party, noted that the 28 years reign of the National Democratic Congress in the Wa Central was enough and it was time to change.

The NPP National Organiser described Hajia Humu as a very hard working young lady who even before she became the NPP Parliamentary Candidate for Wa Central was always moving from office to office in Accra lobbying for things for her people.

“I’m convinced that this election is about our future survival and we need somebody that can bring some good things to the people of Wa Central also which Alhaji Rashid Pelpuo has failed to do for them for years,” he alleged.

Mr Sammi Awuku said he was, however, happy that the youth of Wa Central were poised to help bring about that much desired change in the constituency that would redefine their destiny for good.

“What I’ve seen here today, I’ve never seen it before in Wa Central and I encourage you all to ensure that the turn out for the campaign launch on the 14th of November, 2020 would even be more massive than that of today,” he said.

He further encouraged all to exercise great self-control even in the greatest provocation to ensure that the election would come and pass without any recorded incidence of violence.

Mr Ali Kamara, the Wa Central Constituency Chairman of the NPP, urged the supporters gathered not to go and sleep but endeavour to embark on a door-to-door campaign to canvass more votes for Hajia Humu and President Akufo-Addo to win Wa Central.

Hajia Humu, the NPP Parliamentary Candidate for Wa Central, noted that with the blessings of Allah and the support of the people, Wa Central would not only give victory to the NPP, but would also elect a female as their MP.

She noted that a vote for her and President Akufo-Addo was a vote for scholarships, jobs and general development for the constituency.

“We beg you the people of Wa Central, we want to change the phase of politics in our constituency; the youth have no jobs and Hajia Humu is very capable of bringing jobs for the youth,” she said.

Hajia Humu reminded the people that they were all one and no need to fight because of politics – “election is about exercising our thumb power and I want to encourage you all to exercise that power peacefully on December 7, so that we can all live in peace before, during and after the elections”.