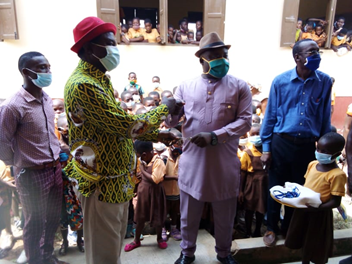 The inauguration formed part of the visit of the DCE and officials of the district education office to monitor and assess the situation in the schools following the reopening of schools.

Mr Ankomah told the people during the inauguration that the classroom block was funded from the one million dollar per constituency initiative of the government.

He said about 20 classroom block projects were constructed in various communities in the district under the one million per constituency initiative.

Mr Ankomah said the government would continue to work to ensure that all on-going classroom projects in the district were completed to enhance teaching and learning.

He said the district education directorate would continue to work closely with the district assembly to solve the furniture challenges facing some schools in the district.

The DCE as part of the visits praised the teachers for complying with all the covid-19 safety protocols in the schools and urged the pupils to always wear their nose marks, wash their hands regularly while studying hard to climb higher in the educational ladder.

He later presented some Personal Protective Equipment to the schools.

Rescheduled Physics, Business Management Papers to be written on October 1 and 7 – WAEC