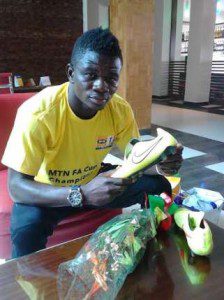 Any talent scouts sitting in the stands at the Sekondi stadium after Medeama?s 2-1 triumph over Kotoko in the MTN FA Cup final would not be searching in vain for detailed information on new whiz kid Akwasi Donsu.

The fact that talents abound in Ghana is no news. While others have flattered to deceive, some have gone on without a trace after blistering starts to their careers but Medeama?s Akwasi Donsu is a new gem hitting his peak at the right time.

The youngster was without a doubt the breakout star of this year?s FA Cup where he contributed significantly to the success of the Mauve and Yellows.

Intelligent, energetic and great passer of the ball, Donsu has been on everyone?s lips since he burst onto the scene with the Tarkwa-based side two seasons ago.

The former Berlin FC youngster has quickly become a cult figure at the club where he continues to earn rave reviews for his sterling performances in the FA Cup competition where he emerged as the top scorer with six goals.

Incredibly, Donsu chalked that feat by scoring five goals from the quarter-final stage and it?s fair to say he?s a real gem in the making.

He is enjoying a blossoming reputation in the West African country and has developed a lethal free-kick technique during his time in Tarkwa.

His neat opener against Kotoko during the epic and tantalizing final at the Sekondi stadium in Essipong summed up his unique qualities as he knocks closer to a national team call-up. His flamboyant and solid displays have not been a flash in the pan but a consistent performer whose talent can catapult him to the top with a cool head.

Indeed Ghana football has a new hero who can attract fans to the stadium with his exquisite style of play with outpouring of affection and good wishes from the club?s supporters gaining inches in the local media.

Quite an unassuming character, the former Berekum Arsenal intelligent enforcer has been the attacking maestro for Medeama, filling in the gap behind the striker and reminding everyone what a rare and gorgeous thing a true talent is to watch.

Donsu scores goals and provides assists, but he also dictates the play for Medeama, sets the attacking tone and gets his teammates to play the game he wants to play. He is their workhorse as well as their artist.

Supremely nimble and creative, he emerged as one of the most exciting midfielders of the FA Cup as he embroidered Medeama?s play with style and smartness as the team cruised to their second FA Cup crown in two years.

A calm figure, the former Techiman-based AC Milan starlet has energy and sublime ball skills which makes him a very dangerous adversary for any team.

The youngster is absolutely brilliant but only remains to be seen how long he will stay in the Ghanaian top-flight.