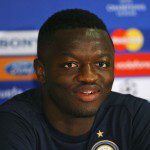 The 30-year-old has been in the market scouring for a new club after leaving AC Milan at the end of last season.

The Ghana international has now emerged as a surprise target for the Saudi Pro League side who are keen to entice him with a mouth-watering offer.

Ittihad top officials including president Ibrahim Al-Balwi and sporting director Mansour Al-Balawi are expected to hold talks with the former Sunderland man in Milan on Friday to attempt to finalize the deal.

Muntari canceled his contract with AC Milan after reaching an agreement with the Italian side but the Black Stars midfielder is not short of offers after reports linked him with a move to Turkish side Besiktas.

He was also reported to be on the radar of Chinese side Shanghai Shenhua but the deal could not materialize after failing to meet the transfer deadline.