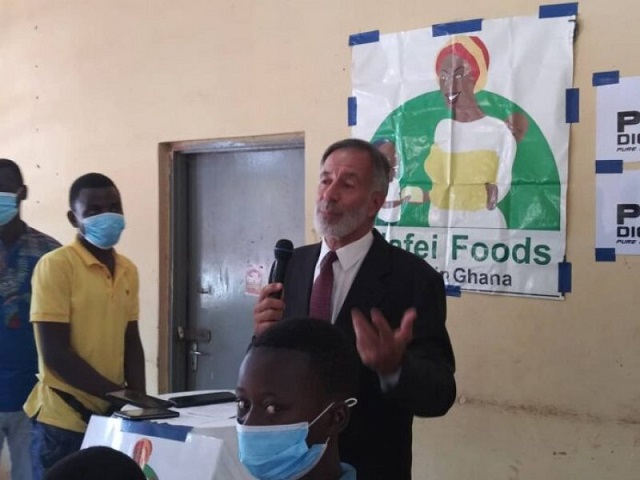 Alafei Foods, an agro-processing company, has reiterated its appeal to the Government to facilitate processes leading to its supply of food to school children under the Ghana School Feeding Programme (GSFP).

Mr Claude Convisser, the Managing Director of Alafei Foods, at a press conference in Tamale, appealed to the Government to sign a letter of intent to assure it that the GSFP would purchase its vegetable sauce, containing textured soya protein, for distribution to school children in the Northern Region.

He said the company intended to use the non-binding letter of intent to secure funding to the tune of GHc156 million to establish a soya meat manufacturing facility at Yendi and partner with 30,000 smallholder farmers, majority being women, to grow soybeans and vegetables in the Region.

The soybeans and vegetables would then be processed at the factory into textured soya protein (TSP) and distributed to school children under the GSFP.

Mr Convisser said the TSP or soya meat “has double the protein of lean beef and sells at a far lower price than any animal protein, which will help improve nutritional status of children.”

He said within two years of the factory’s operations, it would create 500 direct jobs and that would also give meaning to the One-District One-Factory (1D1F) initiative to promote production and reduce unemployment.

In January, 2018, Alafei Foods’ project won unanimous recommendation from the Yendi Municipal Assembly for funding under the Government’s 1D1F and had been cited by the Northern Regional Minister, Mr Salifu Saeed, as evidence of promise and faith in the initiative.

Based on this recommendation, the company started the ground works and in March, 2018, approached the Ministry of Gender, Children and Social Protection and the GSFP on its intention to supply soya meat to school children under the GSFP.

He called for government’s intervention to ensure the project became a reality, adding; “The north of Ghana will never develop unless the farmers and businesses based here are allowed to prosper together.”