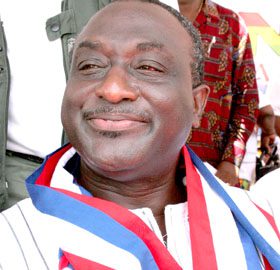 Mr. Amaliba, Would a Triumphant Alan Have Campaigned for Akufo-Addo? Abraham Amaliba is almost invariably described as “a National Democratic Congress (NDC) lawyer,” rather than simply as a lawyer or a Ghanaian lawyer; and so one cannot take him that much seriously when the passionate Mahama shill? presumes to second-guess Mr. Alan John Kwadwo Kyerematen, vis-a-vis the latter’s likely massive loss to Nana Addo Dankwa Akufo-Addo in the aftermath of the October 18 New Patriotic Party’s Election 2016 presidential primaries.

At any rate, should he decide not to heartily and vigorously campaign for Nana Akufo-Addo, this would only be the third deja-vu time that Mr. Kyerematen would be doing so. And so, really, it is highly unliely to mean much. And neither would it amount to a hill of beans, as New Yorkers are wont to say.

Yes, it would not amount to a hill of beans because statistically speaking, the absence of Mr. Kyerematen on Nana Akufo-Addo’s campaign trail was not what really cost the latter Elections 2008 and 2014, as significant as his contributions might have been. Rather, as the 2012 Presidential-Election Petition clearly indicated, it was what may be aptly described as The Afari-Gyan Factor that did in the former New Patriotic Party Member of Parliament for Akyem-Abuakwa South.

But, of course, refusing to heartily campaign for Nana Akufo-Addo’s victory in 2016 would not be in the interest of the man who did the very same thing in both Elections 2008 and 2012. And just like what happened to him in this year’s New Patriotic Party presidential primaries, such a self-serving decision would definitely come back to haunt the man popularly nicknamed the Cash Man. But even far more significant ought to be highlighted the fact that Election 2016 is in absolutely no way about the personal fortunes of Nana Akufo-Addo. Rather, it is first and foremost about the iron-clad determination of Ghanaians not to be socioeconomically and culturally railroaded by the cronyistic Mahama-led National Democratic Congress (NDC) gravy train.

And on the latter score, it is more than quite obvious that Ghanaians have had more than enough of the gross incompetence of the Rawlings posse. Indeed, should Mr. Amaliba’s no-brainer prediction turn out to be what the proverbial doctor ordered, those of us who have become nauseatingly used to the same would only have been poignantly vindicated in our very dispassionate assessment of the sub-standard leadership qualities of the man, at least as far as the collective aims, interests, objectives and aspirations of the New Patriotic Party are concerned.

As a party, we are also too sophisticated, having come this excruciatingly far, for Mr. Amaliba to facilely and cavalierly suppose that he could interpret for us what the Mahama apparatchik presumes to be the gaping spatial divergence between a Kyerematen pro-forma endorsement of the man who thrice defeated the latter in the New Patriotic Party’s presidential primaries, and the Cash Man’s real practical and moral convictions.

Whatever the outcome of the reality on the ground, we fervently hope that if he even half values his ideological association with the Danquah-Busia-Dombo Tradition, that Mr. Kyerematen would recognize something meaningful about the immutable significance of what having a New Patriotic Party government at the Flagstaff House would mean for the long-term prosperity and development of Ghana. Shall we dare characterize the preceding as “Words to the Wise”?