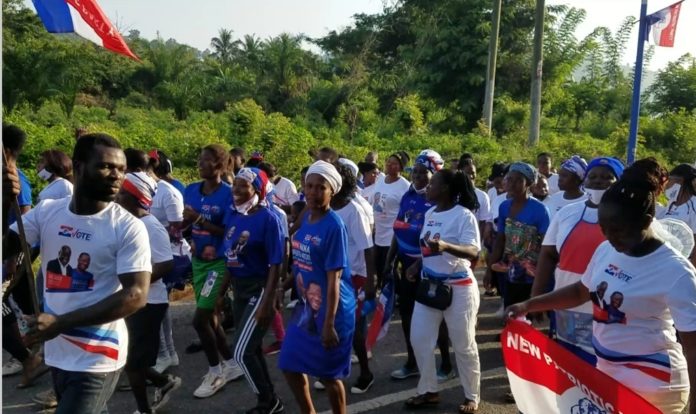 Scores of supporters of Mr John-Peter Amewu, the Minister of Energy and the New Patriotic Party (NPP) Parliamentary Candidate (PC) of Hohoe Constituency have held a health walk in preparation for the upcoming general elections.

The supporters from the Alavanyo Traditional Area include students, and volunteers participated in the more than two-hours walk from Alavanyo Abehenease to Dzogbedze amidst music and dancing.

Mr Apoenchi Mathias, the NPP Coordinator, Alavanyo Deme/Dzogbedze/Agorme Electoral Area in an interview with the Ghana News Agency (GNA), said: “all this while, we’ve been voting anyhow but for this particular year, all Alavanyo towns have seen the good works of Mr Amewu and have decided to work tirelessly for him to win.”

He said the most important thing the traditional area needed was peace and commended the PC for the steps to ensure the establishment of a police post and the provision of streetlights to curb criminal activities.

Mr Apoenchi said construction of a toilet facility at Alavanyo Deme was 80 per cent complete while works on a school building would soon begin at Alavanyo Wudidi.

He also noted that apart from the development projects, most of the youth from the area had benefited from employment opportunities in the various security agencies, describing the gesture as very refreshing.

“Furthermore, the provision of boreholes in each community of the area to ensure access to safe and potable drinking water. The Alavanyo Traditional Area has also gained a Council status and our Paramount Chief is also a Forestry Commission Board Member.

“This is an achievement that has never happened so for Alavanyo, we have to come in terms of benefit from Mr Amewu and the only thing we can do to appreciate it is to vote for him.”

Mr Frank Dotse, one of the defected members from the NDC, said it was time to move from party colours to endorse development-oriented candidates and urged the electorate to vote for Mr John-Peter Amewu.

CoLA: NAGRAT In Eastern Region To Strike At June Ending