Volta Regional Minister, Dr. Archibald Letsa, has explained that the tension in Alavanyo between security personnel and community members follows an operation against persons dealing in arms and Indian hemp known locally as ‘wee’.

His however gave the assurance that will be restored despite the unfortunate incidents that have led to the loss of human lives and left others with varied degrees of injury.

But, explaining what led to the recent disturbances in the region on Monday’s edition of Eyewitness News, the Regional Minister mentioned that the clashes were not caused by the long-standing dispute between the people of Alavanyo and Nkonya as speculated in the media, but rather, by a police operation to crack down on arms and drug trade in the community.
“There was a misunderstanding between some police officers who were on duty and the youth of Alavanyo Dzogbedze. This had absolutely nothing to do with Alavanyo and Nkonya clashes. The whole issue is about cultivation of Indian hemp. The police had gone there to set fire into the Indian hemp and the trafficking of arms and drugs. That was a problem between the police and the youth that brought the conflict between the two groups. “

Dr. Letsa also disclosed that the security detail presently in the Volta Region is enough to restore peace the region, adding that investigations are currently ongoing to ensure that finality is brought to the matter.

“Police rifles and handcuffs were seized. In the process, there were exchanges of fire and two people fell with others injured. The REGSEC met a team, and has managed to get the dead bodies to the mortuary. We are investigating the source of the shots and who fired them. There have been series of investigations to find the root cause of the problem and how to stabilize the peace that the communities are enjoying. We have enough security men in the region to handle the situation.”

Earlier, Citi News’ Volta Regional Correspondent, Benjamin Aklama, reported that the Alavanyos are accusing the people of Nkonya of shooting at them.

The Alavanyos he said have climbed a mountain between Alavanyo and Nkonya, and are firing into the military base which is said to be located at Nkonya.

“One could hear guns shots from a distance,” he added.

As a result, 70-year-old man, Fred Afenyo, was reported dead, while a military officer has been injured in an exchange of fire involving the people of Nkonya and Alavanyo in the Volta Region.

Both towns have been under curfew following violent clashes that had been triggered by an over 90-year-old dispute.

Aklama however said the recent sporadic shooting didn’t happen at the same place of Sunday’s clash that led to the death of two young people. 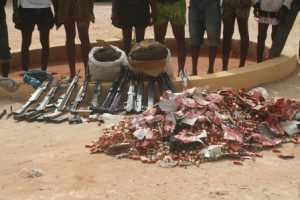 Some two youth of Alavanyo Dzogbedze died, while six persons sustained injuries after they allegedly engaged a military-police team in a gun battle over the weekend.

The Volta Regional Police, Commander DCOP Francis Doku, told the media that the police who gathered intelligence that some people were massing up weapons in the town dispatched a six-member police team to ascertain the truth of the matter.

He said when the team got there, they were outnumbered and three of their handcuffs and an AK-47 were seized by the youth.

DCOP Doku said in an attempt by the military to peacefully, retrieve the gun and handcuffs, the youth opened fire on them and they retaliated thus leading to the death of the two.

Some youth of Alavanyo Dzogbedze on Monday blocked all major roads in the town in protest of the killing.

The Alavanyo Township has been under curfew for some time now following a protracted chieftaincy dispute and reprisal attacks between people of the town and that of Nkonya.