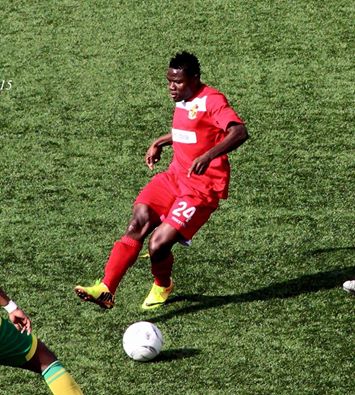 Ghanaian midfielder Albert Bruce was instrumental for Naxxar Lions as they came from behind to beat direct rivals ?ebbu? Rangers 2-1 and gain fresh hope of avoiding relegation for the second year running.

The former Kotoko combative midfielder played full throttle for the side as they coasted to the vial win in the Maltese top-flight.

All the Naxxar players was basking in glory at the final whistle as Brazilian striker Gilmar took a photo to capture this landmark moment in the season as his team-mates left the pitch to the applause of their fans.

There was no doubt as to the legitimacy of Naxxar?s victory on Sunday as a low-key first half for Zerafa?s troops was in no way a credible indicator of what was to come.

After the change of ends, Naxxar seized the moment as Gilmar and Jorge gathered courage to lead the way as they turned the result in their favour for a fine victory that lifted them away from the relegation zone.

The match was devoid of scoring opportunities in the opening 20 minutes as Naxxar?s attacking triumvirate of Jorge, Gilmar and Terence Vella failed to stretch their opponents beyond routine work.

Naxxar could have levelled things up just before half-time. In a goal-mouth melee inside the ?ebbu? area, the ball fell into the path of Albert Bruce but the Ghanaian midfielder was blocked by the Rangers defence as he was about to shoot.

Naxxar seemed to step up a gear and Bruce ran to meet Doffo?s pass but he failed to test Bartolo.

The 21-year-old has been in fine form for the side since he joined from Qormi United at turn of the year.