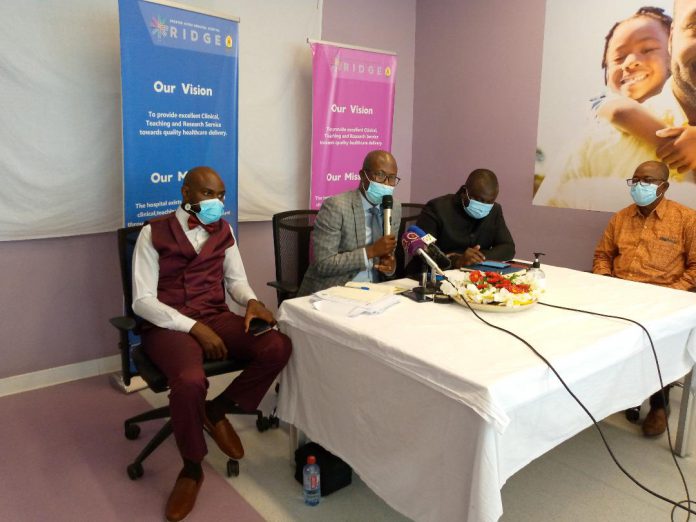 Mr Albert Kwabena Dwumfour, Head of Corporate Affairs, Tobinco Group of Companies, has made a personal donation of GHS10, 000 to the Greater Accra Regional Hospital (Ridge), to support the treatment of a siamese twins.

Experts at the Hospital, said although the entire surgery would cost three million Ghana Cedis, to enable them live independent lives, there was the need to procure some equipment to the venture.

Mr Dwumfour at the presentation in Accra on Wednesday, said he had earlier prepared to donate five thousand Ghana Cedis towards the surgery of the twins, but had to double the amount after seeing the condition of the babies.

He said as a Christian, he was touched to support the needy and vulnerable in the society with part of the resources that God had blessed him with, saying, “it is an act of goodness as guided by the Holy Bible,” and encouraged other well-meaning Ghanaians, Corporate Organisations and philanthropists, to see this as an opportunity to help others who were less privileged.

Mr Dwumfour, who is also currently aspiring for the Presidency of the Ghana Journalists Association (GJA), explained that the role of the media was not to only expose the wrongs in society, but also to be the “voice of the voiceless,” of which this case was a typical example of an excellent journalistic expose.

He called on all media outlets to sustain the campaign to raise more funding for a successful surgery for the babies and to heighten the confidence in the country’s health system.

Dr Emmanuel Srofenyoh, Medical Director, Greater Accra Regional Hospital, thanked the Mr Dwumfour for his benevolence, and said medical doctors at the facility were racing against time to separate conjoined twins at the head, which was the first of its kind to be done in Ghana.

He said the story of the babies were known to be a pure mistake in science with no spiritual connotation, explaining that conjoined or siamese were simply identical twins joined “in utero,” meaning that the process of separation in the womb during their development as an embryo was incomplete, and it could lead to a fusion at any part of their body.

However, fusion of the heads of these babies were an uncommon occurrence with data showing just 2.5 million of such cases globally, with 60 per cent of them being still birth, and 35 per cent dying within 24 hours after their birth, he said.

Dr Srofenyoh, said for the first time in the history of Ghana, there had been a strong collaboration between local and international health institutions including the 37 Military, and Korle-bu Teaching Hospitals, and were also in consultation with the Ministry of Health, and other Government authorities, due to the complexity of the surgery.

He said “we have also consulted experts who have had the opportunity to do this kind of surgery in the United States, the UK, India, Brazil, and South Africa, and shared the images with them to look at everything,” and they had all confirmed that although the task was enormous, “it can be done.”

Dr Srofenyoh said a Multi-disciplinary team comprising of more than 100 highly spirited medics and para-medics had been constituted, and the success of the surgery would place in Ghana’s name on the world map as a destination for modern medical expertise.

This, would be the starting point of Ghanaians not having to travel abroad on daily basis to get medical care which costs so much, he said.

The Medical Director indicated that although the Government had pledged its support to provide the needed equipment for the surgery, there was the need to mobilise additional funding to sustain subsequent health needs of Ghanaians and appealed to the public to show their support so that they could share in the success.

Dr Emmanuel Yao Voado, a Consultant Neurosurgeon, Greater Accra Regional Hospital, said the surgery would be done in five stages and that time was running against them because the babies were growing, hence the need to hasten resource mobilization.

He also encouraged the public to donate towards the resettlement of the family of these vibrant children to be able to grow up in a healthier and safer environment and shelter after their lifesaving encounter.