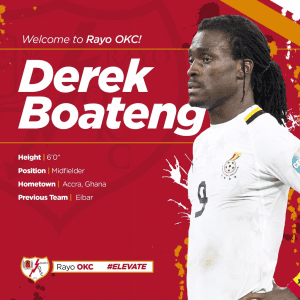 Newly-signed Rayo Oklahoma City coach Alen Marcina believes the experience of new Ghanaian signing Derek Boateng will be crucial for his side this season.

Boateng, 32, has joined the American second-tier on a one-year deal.

He joins the side after leaving Spanish side Eibar.

Rayo Oklahoma City coach is counting on the experience of the former Fulham and AIK Stockholm man.

“It is essential to have experience, presence and leadership in the center of the park, and the singing of Boateng fulfills that need,” he said

“With Boateng we have an outstanding person and player with experience on some of the best leagues in the world, which include Spain’s La Liga, the English Premier League, the German Bundesliga as well as representing his country in the World Cup.”