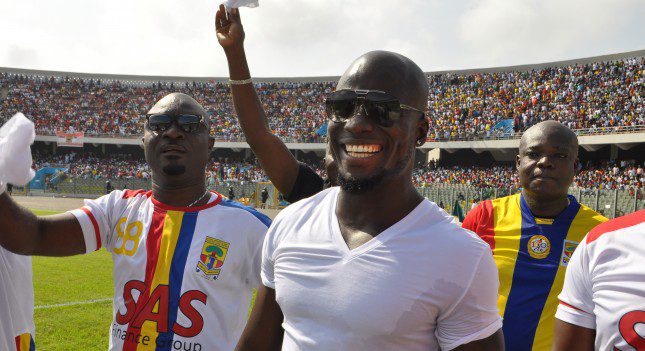 Appiah?s testimonial will come off in June

Ex board member of Hearts of Oak Alhaji Suleman Braimah ?Alhaji Hearts? wants a massive turnout at the Stephen Appiah testimonial game as a way to celebrate a ?legend?.

The 34-year-old is having his long-awaited testimonial game being organized in his honour in June following the official announcement of his retirement from football earlier this year.

The exact date for the event which is expected to draw football stars from all over the world will be announced at the launching of the historic testimonial match on Monday at the Accra International Conference Center.

Even ahead of the game?s launch, ex board member of Hearts of Oak ? one of Appiah?s former clubs ? Alhaji Hearts wants Ghanaians to show appreciation for the immense contribution made by the ex Juventus star through a massive attendance to the match.

?His [Stephen Appiah] contribution to the Black Stars and Ghana football as a whole is admirable. He was an inspirational leader and we all admired his excellent and quality leadership,? he said.

?I was particularly happy when I heard that there was going to be a testimonial match in his honour.

?I told myself that I will invite myself to the event even if I am not officially invited by the organizers because Stephen is a like a son to me.

?My humble appeal to all Ghanaians is that we should all come out in our numbers during the event and support it to the latter.?

Primeval Media, an event and sports marketing outfit has been mandated by the former Black Stars captain to organize the Testimonial Match.

The grand launch on?Monday, April 13, will be used to unveil series of activities ahead of the event.

He also led the side to the 2010 finals staged in South Africa before hanging up his boots.

Day of the African Child to be celebrated in Ghana