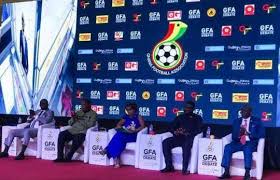 Stakeholders in football have been bombarded with lots of concepts and structural frameworks targeted at changing the fortunes of Ghana Football over the past few months and barring any unforeseen circumstances, delegates of the Ghana Football Association (GFA) would head to the polls on Friday, October 25, 2019 to elect new executives that would spearhead the day-to –day activities of football for the next four years.

Undoubtedly, this year’s Presidential race would go down in the annals of Ghana Football as the most competitive with six candidates including George Afriyie, Kurt Okraku, Nana Yaw Amponsah, George Ankomah Mensah, Fred Pappoe and Madam Amanda Clinton all vying for the principal position of Ghana football.
Deciphering the manifestos

Every aspirant in the Presidential race has laid down their blueprint by which their office would be administered and one commonality in all the manifesto was the need to rebrand the GFA considering its tarnished image over the past few years.

Certainly, the revealing Number 12 unveiled the rots in Ghana football and the next President of Ghana football would have lots to do in rejuvenating the confidence of all football stakeholders to help the game thrive.

The need for transparency, accountability and annual audit was something that common in the manifesto of the candidates, a principle enacted by football world governing body, FIFA, to ensure financial discipline among member countries.

Another topical issue in the manifesto of the candidates was the need to restructure our local competition which includes the Ghana Premier League, Division One League, Women’s football, FA Cup competition and Juvenile football in order to make them attractive to the corporate bodies and also valued by the fans.

Improving the welfare of players, equipping the technical staff of national teams and club teams and security of supporters at match venues were among other issues that were raised in respective manifestos.
The Debate

The GFA Presidential debate held last Monday was an illustration of the competence brought forth by each candidate and it was a very revealing exercise.

Despite, George Afriyie missing out on the debate, the five candidates were exposed to some pertinent issues that needed to be tackled to make Ghana football great.

Mr. Fred Pappoe, was one of the top performers on the night bringing forth some wonderful ideas considering his vast experience in football especially having been Vice President for a couple of years under the Kwesi Nyantakyi led administration.

The youthful Nana Yaw Amponsah, made a strong case why he should be made the next President sharing his knowledge on how to address some setbacks in the game of football.

Mr. Kurt Okraku, certainly the man with the rich football credentials, did very well on night bringing forth his knowledge in the area of marketing and football administration and how he wants to revamp the FA to make it successful in the near future.

George Ankomah and Amanda Clinton, were not too bad on night despite some hiccups in their delivery but also made a strong case to the delegates.

So after the unveiling manifestos and going through the debate processes, the big question is ‘’Who becomes the next President of Ghana’s football? George Afriyie, Kurt Okraku, Fred Pappoe and Nana Yaw Amponsah are certainly the front runners but George Ankoma and Amanda Clinton could be surprise packages on Friday.

In summary Ghana football is at crossroads and regardless of the outcome of the highly anticipated election on Friday, stakeholders would take a big step in reigniting the passion of nation after a turbulent period in Ghana’s football history.