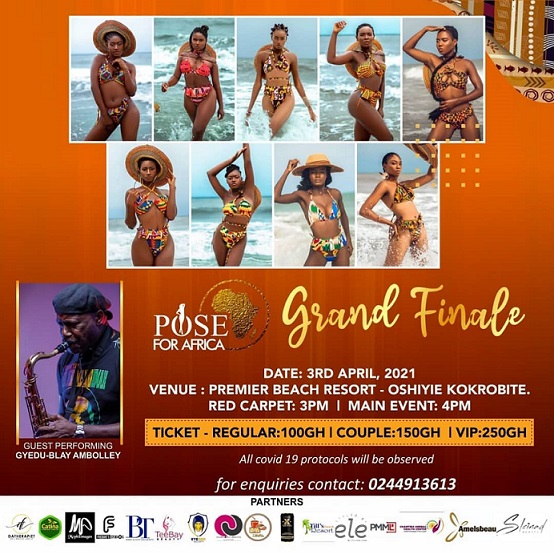 After weeks of performing series of tasks, nine beautiful models have made it to the grand finale of the maiden Pose For Africa TV reality to be staged on Saturday, April 3, 2021.

The Premier Beach Resort in Krokrobite would be the center of attraction come April 3rd with Highlife legend Gyedu Blay Ambolley billed to thrill audiences with some ruthless sound package.

This year’s reality show themed ‘Representing the true image of Africa’ is the first of its kind in Ghana as models promote the African Culture, tourism, and tradition via their project shoots and tasks.

Mrs. Afua Asantewaa Aduonum, Executive Director of ASKOF Productions, organizers of the reality show in an interview said, “I am very happy the first final is coming this weekend after weeks of engaging the ladies in series of task including Brand Representation and Pitching, African Woman Fishing, African woman warrior.

“The show has been very exciting so far with six ladies eliminated and the line-up of the grand finale sets up an enthralling grand finale and may the best model win the ultimate,” she said.

The winner of the maiden edition of the Pose For Africa would get an official car, a modeling contract, a trip abroad to partake in a fashion show, among others.

Among media personalities to grace the grand finale include Akuma Mama Zimbi, Charles Osei Asibey, Mona Gucci, and a musical performance by Ambulley, Nakeeyat Dramani Sam, among others.

Tickets for the finals are currently on general sale including Regular (100GHC), Couple (150GHC) and VIP (250GHC).