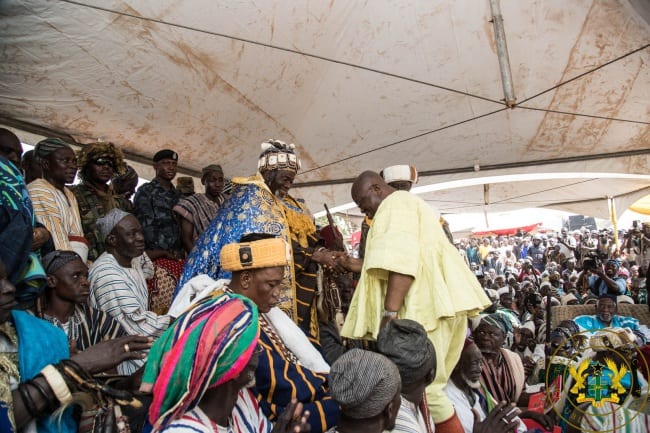 President Nana Addo Dankwa Akufo-Addo has rallied the people of Dagbon to unite solidly behind their new King, Ya-Na Abubakari Mahama II, to bring development to the area.

It was time Dagbon took its rightful place, once again, as the bastion of tradition and culture.

That would demand giving the Ya-Na Mahama the needed support to achieve rapid socio-economic progress.

The President made the call when he joined the chiefs and people at the coronation of the Dagbon Overlord.

This brings to a closure 17 years of bitter chieftaincy conflict between the two royal gates – Andanis and the Abudus.

Ya-Na Mahama II is the 42nd King of the 600-year-old Dagbon dynasty, with its seat in Yendi, in the Northern Region.

President Akufo-Addo said Dagbon had just witnessed a new dawn in its history, and it fell on all the citizens of the area to come together to heal the wounds and reconcile.

It was by so doing that dignity would be brought to the traditional area and move Dagon to new heights of peace, progress and prosperity.

Resplendent in a bright yellow smock and traditional northern leather boots, he expressed optimism that the enskinment and coronation of Ya-Na Mahama, as ruler of Dagbon, would put an end to the long struggle that had deprived the area of peace and progress.

He reminded the people to overcome division and to embrace every intervention that would advance the process for peace.

They should avoid those who profited from the protracted conflict between the royal gates.

“You have to be resolute in warding off such people by strengthening the process of reconciliation among the Dagbon people.”

He told them not fear the outside enemy but those within who could bring the kingdom to its knees.

To Ya-Na Abubakari Mahama, he said: “I believe you are the man to reconcile Dagbon and put it back on the path of progress and prosperity”.

He was confident the King was going to discharge his role with dignity, and pledged his government’s strong backing.

President Akufo-Addo commended Committee of Eminent Chiefs headed by the Asantehene, Otumfuo Osei Tutu II, for the instrumental role in procuring peace for Dagbon.
He also applauded the Abudu family and the sons and daughters of Dagbon for the maturity and goodwill they had exhibited that had led to the historic coronation at the Gbewaa Palace.

Government was determined to work with passion to make the Yendi area a hub of trade and commerce, to eradicate poverty.

“But if these developments are to make a positive impact in Yendi, then there must be peace. Development cannot take place in a situation of conflict.”

“As I have said before, I am neither Abudu nor Andani; I am person who stands for peace and development in Dagbon.”

“I feel a sense of excitement that under my tenure of office as President, Dagbon finally, hopefully, finds lasting peace.”

Prolonged jubilation continued at the forecourt of the Gbewaa Palace, as the enthusiastic crowd cheered in gratitude and recognition of President Akufo-Addo’s faith and commitment to see a united Dagbon.

In his engagement with the people of Yendi, before and after he assumed the office, he promised to ensure that peace, tranquility and reconciliation was brought to Dagbon.

“I am an Akyem from Abuakwa, I’m neither Abudu nor Andani. But I will help bring peace to Dagbon,” he told the people of thee area in an interaction last year.