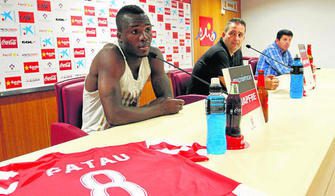 Spanish second-tier side UD Almeria have reached a loan agreement with Granada for the transfer of Ghanaian midfielder Fatau Mohammed.

Last season, he played on loan at La Liga outfit Rayo Vallecano where injuries restricted him to only 10 appearances.

He said: ?Before coming, the coach of Almeria Paco Jemez spoke with [loan at Rayo] and the game plan is the same. It will not be difficult for me because I was with him and I can provide the same.?

Almeria hope his experience can help them return to the Spanish top-flight.

In the 2013/2014 season, Fatau was talked about after breaking into the Granada first team where he made nine appearances.