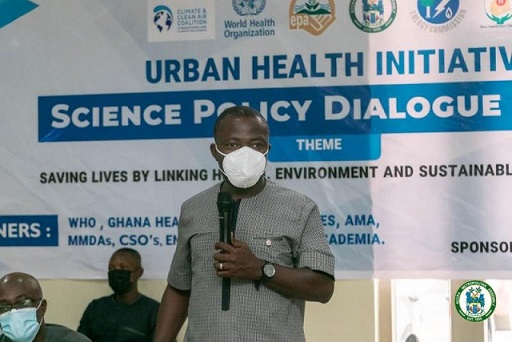 The dialogue is on the theme: “Saving Lives by Linking Health, Environment and Sustainable Development.”
The Urban Health Initiative is a project led by the World Health Organisation in collaboration with international implementation partners such as the UN-Habitat and ICLEI with support from the Norway Government and the Climate and Clean Air Coalition (CCAC).

The UHI is aimed at realizing the full range of health benefits that can be achieved by tackling urban short-lived climate pollutants.

Mr Sowah said the architecture of the city of Accra had changed for the past 15 to 20 years with the provision of a number of storey buildings and that called for the introduction of policies for developers to consider energy efficiency compliance in their building plans.

He said the communities’ involvement in the pilot programme of the UHI had given hope of achieving good results from the air pollution discussions and expressed gratitude to the WHO and the other development partners for their support.

The Chief Executive appealed for more technical and non-technical assistance, saying; “so that when you are assessing our standard, we can confidently say that indeed we have improved on the lives of our people.”

Dr Neema Rusibamayila Kimambo, the WHO Country Representative for Ghana said air pollution in Ghana was driven by rapid urbanization and population growth in cities such as Accra, Kumasi, and Takoradi and vehicular emissions, biomass burning, electronic waste, and poor land-use planning were identified as major contributors to environmental pollution.

She said, however, that because these pollutants could travel long distances everyone could be at risk of suffering from bad air.

“The UHI in Ghana has over the last two years collaborated with MoH/GHS, EPA, AMA, SPH-Legon and other key state actors to measure health risks, strategise actions required to reduce citizens’ exposures and identify mitigating factors to reduce the amount of pollution from a variety of sources,” she said.

Dr Kimambo said the Initiative had found that 1,700 lives could be saved every year in the Greater Accra Region by meeting the WHO air quality guidelines.

Mr Emmanuel K.E. Appoh, the Acting Director of the Environmental Protection Agency (EPA) in a presentation said polluted-related deaths contributed to about 16 per cent of deaths in Ghana in 2016, according to (Lancet 2017).

He said the World Bank Country Environmental Analysis in April 2020 said air pollution in 2017 had an estimated average cost of 2.5 billion U.S dollars or an equivalent of 4.2 per cent of Ghana’s GDP.

Mr Appoh said air pollution was number one environmental risk to public health, and was ranked as the sixth overall risk out of 19 for death, and that according to the WHO in 2017, 28,000 deaths in Ghana were attributed to poor air quality.

Mr Appoh said the implementation of the Greater Accra Metropolitan Area Air Quality Management could reduce the number of the deaths by 430 each year and that asthma cases and absenteeism from school and work could be also reduced.

He said according to the Ghana Statistical Service, in 2010 lower respiratory infection ranked second to malaria among top 10 diseases and that 3,000 children under five years died from exposure to household air pollution.

The Director said the EPA took a number of strategies and interventions (projects and programmes) to reduce the impact of air pollution by creating awareness, while promoting air quality issues on television and radio.