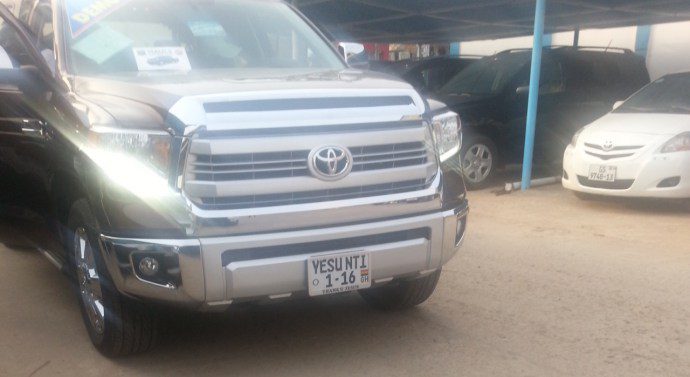 One of Ghana’s premier highlife artists Daniel Abrantie Amakye Dede has decided to add a Toyota Tundra to his collection of cars.

The treasured Artist who needs no introduction poses on his new car in his new photos of the customized 2015 Toyota Tundra with the caption, “Yesu Nti#

Well, the price of this heavy tundra our sources got was 75,000.00 US dollars

When asked why he has customized the car with the caption ‘’Yesu Nti’’, Amakye Dede told 24hoursgh.com hat he did that to praise God for safeguarding him throughout the year.

On 2nd January 2016, he was involved in a fatal accident that killed his manager Isaac Yeaboah and seriously injured his bodyguard.

Amakye Dede disclosed to 24hoursgh.com that, he has now turned to be a man of God.

He said his outfit is gearing up to organize a massive thanksgiving concert to praise God for saving his life.