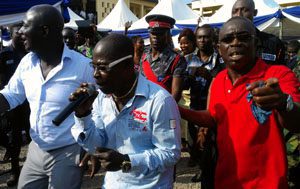 ACE HIGHLIFE musician Amakye Dede was the toast of hundreds of people including policemen that attended the West Africa Security Social Activity (WASSA) event that took place at the Police Headquarters in Kumasi last Friday.

Abrantee, as he is affectionately called, put up a breathtaking stage performance that electrified the merrymaking-event which was graced by top stars from the Ghanaian movie, radio and music industries.

Amakye Dede, exhibiting abundance of energy and excellent stage skills, as usual, sang melodious songs for close to one-hour which sent the policemen including the Ashanti Regional Police Commander, DCOP Kofi Boakye, to the dancing floor.

Abrantee?s performance was so electrifying that the chairman of the occasion, Baffuor Asare Owusu Amankwatia, the Bantamahene, even urged Amakye Dede to sing further after his time to perform had elapsed.

DCOP Kofi Boakye who looked elated, quickly returned to the dancing floor again, as he majestically displayed his dancing skills amid shouts of ?Commander One? ?Commander One? by the equally delighted-looking policemen present. 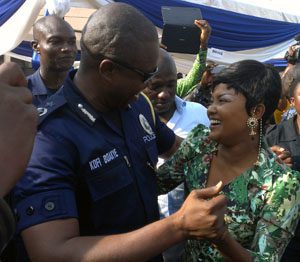 This year?s WASSA in Kumasi could be described as a show for stars in the music, radio and movie industries. Top movies stars including Agya Koo, Nana Ama McBrown, Akrokobeto, among others, were present.

In the music industry, top stars like Nana Tuffuor and Aboagye Dacosta were also there to entertain the crowd.

From the radio industry, ace radio broadcaster, Kwame Sefa Kayi of Peace FM in Accra and Kwame Adinkra of Angel FM in Kumasi, also graced the show to make it grand.

The Actors Guild and the Film Producers Association of Ghana also attended the historic event which saw the Police Band providing mind-blowing tunes to entertain the attendants.

This is the first time that WASSA at the Police Headquarters in Kumasi had attracted top stars from the music, movie and the radio industries and DCOP Kofi Boakye?s immense popularity across the country was said to have done the trick. 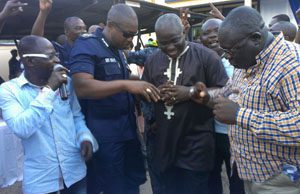 Deputy Ashanti Regional Police Commander, ACP Ampofo Duku, heads of the other security agencies in the region and DCEs like Afrifa Yamoah Ponkoh and Donkor Fuseini, were also there.

In his succinct remarks, the Bantamahene, Baffuor Amankwatia, described this year?s WASSA as ?exceptional in the history of the police in the region,? and he lauded DCOP Kofi Boakye for his dynamism which helped to make the event a grand one.

The Ashanti Regional Minister, Eric Opoku, disclosed that the Regional Coordinating Council had charged the district assemblies to help the police acquire office and residential accommodation in their respective stations.

He urged the police administration to identify and deal with some few miscreants that were dragging the good image of the police service into the mud, urging the public and the media to assist the police by feeding them with credible information to battle crime.

DCOP Kofi Boakye assured that the police would work assiduously to maintain law and order in the region.