News Ghana
Home News Amb. Quarcoo poses with the team at his house 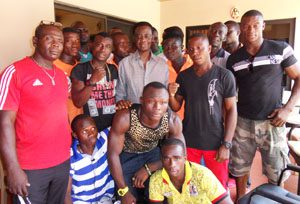 Amb. Quarcoo poses with the team at his house

Members of the national boxing team, the Black Bombers have petitioned their president, Ambassador Ray Quarcoo, asking him to rescind his decision of stepping down as the head of the Ghana Boxing Federation (GBF).

The 20-member team, led by head coach Asare Ofori, called on the president last Saturday at his Roman Ridge residence, where they pleaded with him to reverse his decision two days after the latter had put in his resignation.

Spokesperson for the team, Azumah, said the timing of their president?s resignation could have a negative effect on their preparation for the forthcoming Glasgow Commonwealth Games.

He told the media after presenting the petition that ?he has done a lot for us. He has been very supportive from the beginning of our camping till now. Even after putting in his resignation, he called our leaders and handed our allowances to them.

?If he maintains his stand, it will affect us so much. Now, we have broken camp because there is no one to take care of our camping expenses.

?We are pleading with our coaches whose actions, we believe, necessitated our president to resign to allow us to go to the Games and come so they can resolve whatever issue at stake,? he added.

Coach Asare, in support of his side?s plea, indicated, ?I don?t fault my colleague coaches for their actions. It is their constitutional right to press home their grievance, but I think the timing is not good considering how close the Games is. It is very sad, I think we should review the calendar (for congress).?

The Goodwill Sports Ambassador, Ray Quarcoo told the team he would communicate his decision whether to maintain his stand or rescind his decision to the team via the head coach soon. 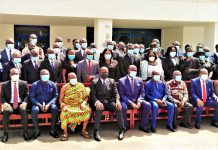