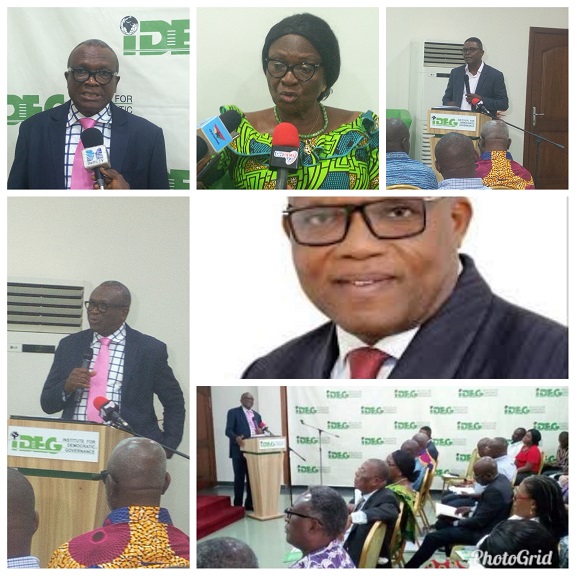 Professor Atsu Ayee, Senior Research Fellow, Institute of Democratic Governance (IDEG) and also a Senior Lecturer, University of Ghana, has called for a constitutional and legal reform in the public sector to address deficit in the composition, size and different nomenclatures of its organisation.

He explained that, the categories of public services listed under Chapter 14 (Article 190 Section 1 a-d) of the 1992 Constitution and the Public Services Commission Act, Act 482, 1994 as vast, complex and amorphous.

Professor Ayee added that, all public sector organisations have different Acts establishing them with their own governing boards, sector ministries and condition of service, which are contradictory and inconsistent with each other.

Talking about the size of the public sector, he said it was regarded as bloated resulting in inefficiency and high personal emoluments element of the budget, since the sector was still the primary provider of wage employment in the country.

He said the different nomenclatures where some called them service, agency, authority, board, commission, and trust created a perception of superiority, importance and rivalry among the organisations.

Professor Ayee was speaking at a seminar themed; “Six Decades of the Public Sector in Ghana: Issues and Prospects,” organised by IDEG in Accra.

However, he called for the harmonization of these nomenclatures to give some uniformity in the way the organisations were governed. According to him, the reform must help reduce the multiple institutions involved in the monitoring and evaluation of public sector organisations.

Adding that, there is the need to address the political settlement problem in the public sector including reforming the election cycle, financing and ensuring compliance by political parties.

“We need to improve the regulation of political parties through strengthening the Electoral Commission and setting up a separate body for complementarities, promote inclusion by amending Article 55(3) to enable political parties in local governance,” Prof. Ayee said.

Accirding him, politicization of the public service may be explained by the active participation of some high profile public servants in partisan politics, contrary to the 1992 Constitution and other legal documents.

Saying, complaints from succeeding Presidents, citizens, the private sector and surveys by think tanks tagged service delivery by the public sector as unsatisfactory.

On her part, Mrs. Bridget Katsriku, Chairman of Public Services Commission, said the issue of bloated public sector was misconstrued since there are many human resource gap in other sectors including education.

Adding that, the absence of established control system had also contributed to the excessive increase in the size of the public sector and called for a concerted effort to address the problem.

She appealed to research institutions to conduct research on the country’s nomenclatures and propose the best appropriate names to use.

Present at the event were Dr. Emmanuel Akwetey, Executive Director, IDEG, Dr. Alex Glover-Quartey, former Head of Civil Service, Dr. Nana A to Arthur, Head of Local Government Service and many others.