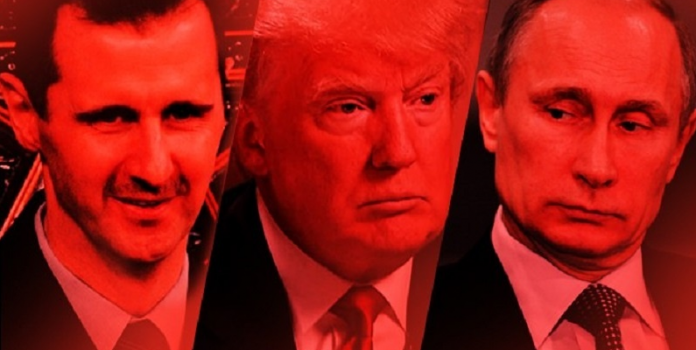 According to The Daily Beast with reference to a source in the White House and Congress, the administration of U.S. President Donald Trump has decided to change the strategy for Syrian President Bashar Assad and will be no more insisting on his resignation.
Moreover, Washington won’t mind the presence of Russian military police in Syria, as well as the creation of de-escalation zones, which were previously proposed by Moscow. Thus, the American authorities are going to ensure stability in Syria after the fall of Islamic State.
At the same time, the U.S. claims that it is not going to induct troops into government-held areas, but will leave its forces in the regions controlled by the so-called “Syrian opposition”.
Most likely, such U.S. strategy can be explained by the following factor: every day the territories liberated from ISIS terrorists by the government forces continue to grow steadily. Americans are not ready to spend on it their own resources, both monetary and human.
It is more profitable for them to delegate this function to the Syrian authorities and Russia.
It should be mentioned that earlier the U.S. Secretary of State Rex Tillerson said, that the White House might include establishing with Russia joint mechanisms for ensuring stability, including no-fly zones, on the ground cease-fire observers, and coordinated delivery of humanitarian assistance. According to the senior official, Tillerson’s points merely build on the established U.S.-Russia deconfliction mechanisms.
It is obvious that this U.S. strategy will be presented during G20 Summit in Hamburg, where the first official meeting of Donald Trump and Vladimir Putin is planned. Fighting terrorism and Syrian crisis will be the basic topics for the international meeting. Therefore, the U.S. will try to benefit tremendously from the upcoming meeting, proposing an initiative that is clearly appealing to the political opponent. That’s why the meeting of the two leaders is an event to be expected.
In fact, the initiative proposed by the United States can yield positive results, but only if they fulfill the undertaken commitments. In this regard, the U.S. needs to review its policy in Syria and move from rhetoric to actions, stopping indiscriminate air strikes in residential areas and supporting militants to implementing highly mentioned political initiatives that can really make a difference for the better. If Washington really enters into a dialogue with all parties of the Syrian conflict the crisis will be resolved much faster.
Source: Firas Samuri
Send your news stories to newsghana101@gmail.com and via WhatsApp on +233 244244807 Follow News Ghana on Google News