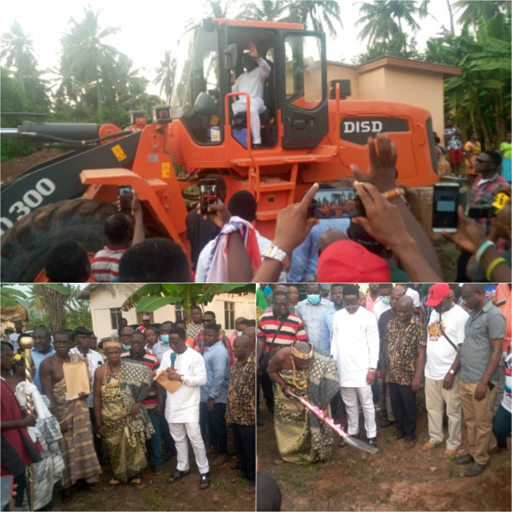 Mr John Peter Amewu, the Minister of Energy, has cut-the-sod for the construction of a Hall of Excellence in Alavanyo Abehenease in the Hohoe Constituency.

The edifice is being constructed at an estimated cost of GH₵1million to the specification of the Bui Power Authority on a two-acre land donated by the community.

Mr Amewu, who is also the New Patriotic Party (NPP) Parliamentary Candidate (PC) for Hohoe Constituency, in an address at a durbar of Chiefs and people of the Area, said the mini-hydro constructed by the Bui Power Authority in Alavanyo was the only one in the sub-region, which made it an important project.

He said the Hall when completed would serve tourists and visitors to the area and provides opportunities for products from the area and the region.

The PC called on the people to take into consideration the good works of the NPP government under the leadership of President Akufo-Addo in Alavanyo and the Hohoe Constituency at large and make the right choice on December 7.

“President Akufo-Addo has done a lot for Alavanyo and he is willing and ready to do a lot more for you if you give him another four years. That alone will be possible if you also vote for me to represent you in Parliament and work together with him for you.”

He said his motive to represent the Constituency in Parliament was to improve the lives of people, especially providing jobs for the youth and women traders, who might need capital to start or sustain their businesses.

Mr Amewu noted that households without electricity metres would be provided with free ones which were to be fixed for them at no cost.

Togbe Komla Kunde V, Chief of Alavanyo Abehenease, expressed gratitude to Mr Amewu for his support towards the area, especially in ensuring peace and support for the youth and women.

He called for the extension of electricity and the provision of scholarships to brilliant but needy students.

The Energy Minister was also enstooled Development Chief of Alavanyo Agorxoe under the stool name Togbe Agor I.

He presented assorted drinks, cash and 500 energy-saving bulbs to the Alavanyo Abehenease for distribution to the people.

He also intensified his campaign in the traditional area and some towns of the Constituency, reiterating his “one family, one opportunity” policy and other life-changing interventions and programmes.

Mr Kwame Amenyo of the Hub Amenyo Company Limited, the construction firm said the project, which was expected to be completed in 12 months, could be finished in six months.

He said he would engage about 50 artisans from the community to allow them to earn an income and to sharpen their skills.