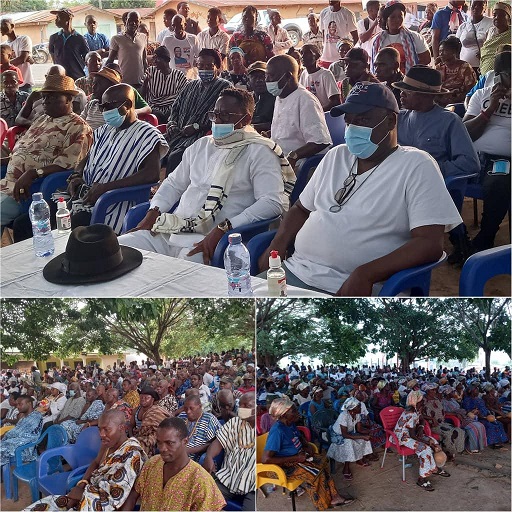 Mr John Peter Amewu, the Minister of Energy and Member of Parliament-elect for Hohoe, has celebrated Christmas with people from all traditional areas in the Constituency.

The celebration is aimed at putting smiles on the faces of all in the Municipality irrespective of their political affiliations.

Mr Amewu, who joined the Alavanyo and Wli Traditional Areas for the celebration, said it was also to express his gratitude to the people for endorsing his candidature as the MP-elect.

He said he would keep to the promises he made during his campaign and fulfil them “one by one.”

Mr Amewu said his ‘One Family, One Opportunity’ campaign message would go a long way to develop the Constituency adding; “I assure you that Wli will become a shining star. I am grateful to each and every one of you.”

Professor Patrick Agbesinyale, the Chief Director, Ministry of Lands and Natural Resources, noted that no children in the Wli Traditional Area would be left behind when it came to education.

Mr Henry Anyomi, Regent, Wli Agorviefe, on behalf of the people, expressed gratitude to Mr Amewu for the gesture.

He said he was confident that the MP-elect would be able to fulfill all promises he made prior to his election.

The Ghana News Agency has also learnt that one of Ghana’s biggest artistes, Shatta Wale, would be in Hohoe on December 28 to treat the people to good music.