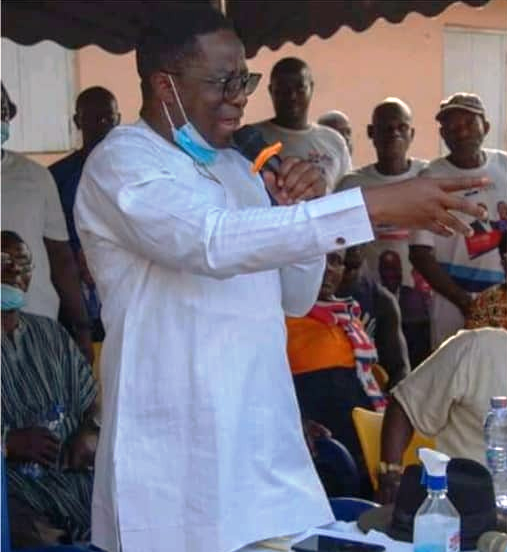 Mr John-Peter Amewu, New Patriotic Party (NPP) Parliamentary Candidate (PC) for the Hohoe Constituency and Minister of Energy, has urged electorates in the Constituency to endorse him for “one family, one opportunity’ policy.

He said his bid to enter Parliament was to help the Constituents especially students, traders and families under the policy and that could be actualised, when the constituents vote for him and the New Patriotic Party in the December polls.

Mr Amewu who said this when addressing the youth of the Muslim community in Hohoe after a keep fit walk added that he was pleased with the massive support shown to him, especially the Zongo youth adding that “with this support, let us replicate this on December 7 and I know victory will be ours.”

“I will not go to Parliament and deny you any good thing that will come my way. I have a generous heart. I am a helper. It is already happening and most of you can attest to the fact.”

The PC noted all developmental projects undertaken within the Constituency showed his readiness to do a lot more for the people and asked them to spread the message to their colleagues to vote for him.

A group known as Hohoe Zongo Young Patriots was also launched with the aim of canvassing votes for the PC.

Mr Amewu also visited a number of electoral areas in the Constituency including; Alavanyo, Galikope and Hohoe-Nima.
He called on the electorate in the areas to see his policies as life-changing ones and never allow it to slip away from them as the only way they could benefit fully was to endorse his candidature through massive votes on December