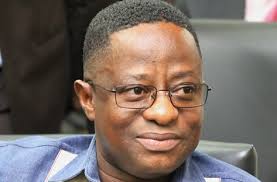 Mr Johnson Asiedu Nketia, General-Secretary of the National Democratic Congress (NDC), has described Mr John-Peter Amewu, Minister of Energy and Parliamentary Candidate as a good man who was in the wrong political party.

“I know Amewu very well and he is from this town, but whatever good he has done as an individual can never change policies of the Akufo-Addo’s government. He will go to Heaven because of his good deeds. He will not go to Parliament.”

Mr Asiedu Nketia addressing party members in Wli and Hohoe Zongo, all in the Hohoe Constituency at the weekend, thanked them for “being with the NDC party since 1992 till date” and urged them to vote for the parliamentary candidate and also the party’s flagbearer to win back the Presidential seat.

“He is my friend so, don’t insult him. What we want is to convince him to come and join the NDC, his government believes in prosperity for few family and friends, so, even if you are in his government, you could be helped to become rich, but not same as helping your community to also become rich.”

“You all know we have been under this government for close to four years or so, and you don’t need anybody to tell you how the New Patriotic Party (NPP) governs. You may have a very good person, who is your brother in NPP but he alone cannot change the NPP policies.

The General Secretary noted that the NDC party stood for prosperity for all because it was better for a government to create conditions for everybody in the community to earn a living rather than making individual rich.

“NDC would create conditions to make the youth to be able to make their own living hence the party’s two major policies including; free technical and vocational education to empower the youth.”

He noted that the party would make sure that people who do not have the chance to go to school, were also empowered to earn a living under the party’s free national apprenticeship programme.

“When we come to power, we will recruit at least 500,000 youth nationwide and also select master apprentices and craftsmen, register them and assign these recruits to them under various vocations, while government pays for their services.”

Mr Asiedu Nketia said the NDC government would provide sets of tools and initial capital for apprentices who completed their trainings under the programme.

The General Secretary who revealed that the next NDC government would continue the works of all past governments, urged the members of the party to conduct their campaigns devoid of insults and fights in the Constituency.

“We heard Amewu is building classroom blocks for schools as an individual, but that should be the work of the government. Let him know that we will complete the blocks when we win power.”

However, Mr Anthony Kondobrey, Hohoe Constituency Chairman of NPP, briefing the media later, said the statements by the General-Secretary of the NDC made in relation to Mr. John Peter Amewu, should be regarded as tacit endorsement of the NPP candidate as against the NDC candidate.

He said the level of development activities being carried out in the Constituency, championed by Mr. Amewu is legendary and that electorates of the Hohoe Constituency have noticed that beyond party colours, there must be commensurate development projects to acknowledge loyalty, saying “Asiedu Nketia and the NDC should be ashamed of themselves for using the people for their parochial interests.”

He said the electorates in Hohoe have seen the fruits a single man and decided who their next member of Parliament should be and that Mr. Asiedu Nketia’s description of Amewu as a friend and a good man is long known to the people, who have decided to vote for him.

Mr. Kondobrey disagreed with the NDC General-Secretary that even though Mr Amewu is a good man, his good deeds would only cushion him to enter heaven, but not Parliament insisting that a candidate for heaven is a better candidate for Parliament than the NDC candidate.

He said politics had changed from colonising the minds of the people to only following political colours without bringing the needed development to them, a preserve of the NDC, which it continued to demonstrate since 1992 saying “modern politics bridges the under-development gap, which the NPP is doing and Mr Amewu is serving as the pillar between government and the people, utilising the skills of lobbying for the relevant development of the Hohoe Constituency.”

The Hohoe NPP Chairman said the changing trend of politics is what the NDC and Asiedu Nketia failed to understand and were still thinking that the people are still supporting parties that fail to honour loyalty, would be chasing the wind.

He continued that Mr Amewu is an integral part of NPP government and whatever he did should be seen as part of government’s support to the people in the area adding “how can Amewu use his personal resources to do government work, these monumental development projects cannot be funded by Amewu, that Asiedu Nketia should know better.”

Parents warned against giving excessive household chores to their children