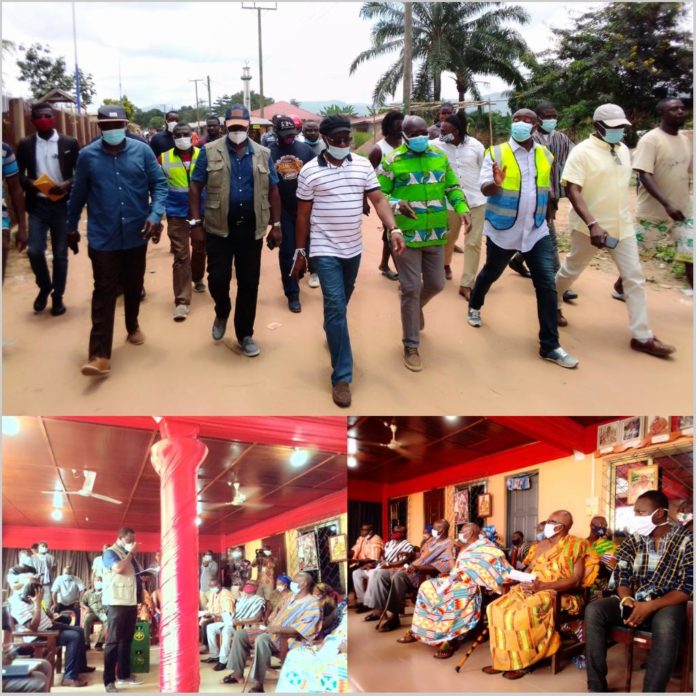 Mr. Kwasi Amoako-Atta, Minister for Roads and Highways has reiterated the government’s commitment to completing construction works on all roads in the country.

He said plans and efforts to work on roads nationwide was as a result of the “vision” of the President to the benefit of the citizenry.

The Minister who addressed Chiefs and people at the Gbi Traditional Council in Hohoe, when he inspected ongoing works on some town roads, said no government in the history of Ghana had initiated the number of road projects the government was undertaking.

He said apart from 38 road projects that were ongoing in the Volta Region, 13 other roads were at procurement stages and would be tackled within the next month.

Mr. Amoako-Atta said construction works had begun on some bridges and ongoing ones were being constructed since 2018.

The Minister noted that the Eastern Corridor road was important for enhancing economic activities hence efforts underway to make it motorable.

He said special arrangements were being made for “action” on the Eastern Corridor road within a month adding that “we only need time to finish work on these roads and we can only do more if you support us and give us another mandate.”

Mr. John-Peter Amewu, Minister for Energy and New Patriotic Party (NPP) Parliamentary Candidate for the Hohoe Constituency, noted that contracts for the ongoing works on the town roads were signed for by the NPP government.

“None of these contracts have been signed by any Municipal Chief Executive at any point in time in the Municipality,” he added.

Togbe Adzofuwusu, Divisional Chief of Gbi-Atabu, noted that the “Gbis have taken notice of the keen interest the NPP government has in the affairs of the Gbi State and the Municipality as a whole.”

He said notwithstanding the number of projects going on in the Municipality, it was worth noting the facelift of roads in the Hohoe township which was “going fast and energetically.”

“We cannot talk about all these projects without acknowledging the contributions and efforts of our illustrious son, John-Peter Amewu,” he said.

The Chief said since the declaration of 2020 as the “Year of roads,” some major roads were being constructed nationwide hence the anticipation of the people for the construction of the Eastern Corridor road.

He said the construction of the “much talked about the road” would alleviate the suffering endured by travellers on that segment.

Togbe Adzofuwusu said, “we the people of Gbi would want to assure the government that in as much as development issues are concerned, we would support any initiative in that direction.”