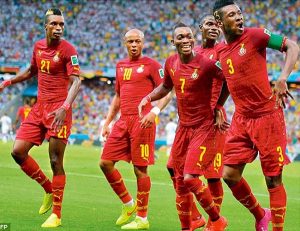 Renowned Sports Journalist Yaw Ampofo Ankrah has entreated the national team Black Stars to grab the opportunity of winning back the souls and hearts of Ghanaians who have lost hope in them by performing credibly in the ongoing AFCON 2017 in Gabon.

Unlike the many Ghanaians who have lost interests in the exploits of the Black Stars, he indicated that he still has hope in the players to perform well to the admiration of Ghanaians.

Speaking on Ultimate Breakfast Show hosted by Lantam Papanko, he described the perception Ghanaians have about the players as ‘natural’.

He said Ghanaians have taken a back due to the disappointment they have had in the past and have vowed not to invest their souls in the team anymore.

‘…the feelings among Ghanaians you know is quite natural, but I think its an opportunity for the Black Stars to reconnect with the masses, and perhaps not necessarily Avram Grants but the rest of the handlers to realise that this is an opportunity for them to win back the hearts, souls and minds of Ghanaians who have taken a back step because they have been disappointed in the past. I think many people have decided to relax a little bit and see what the Black Stars will do before investing any more hopes, dreams and aspirations in them, but I haven’t lost interest in them. I think its about focusing on the professional play and being patriotic rather than the emotions attached to the team.

Asked if there is something fundamentally wrong with the team for not winning the trophy over the past 35 years, he retorted ‘…well this question is one that cannot be answered by one person, its something that we need to look at holistically across board, from the national level right at the top to the ministry of youth and sports, Ghana Football Association (GFA) to media, the supporters, the playing bodies, I think there is no connections and love’.

Mr Ankrah bemoaned the lack of unity among the various key stakeholders saying that detachment is emotionally and spiritually affecting the Black Stars.

The Black Stars will play with Uganda tomorrow 4:pm.