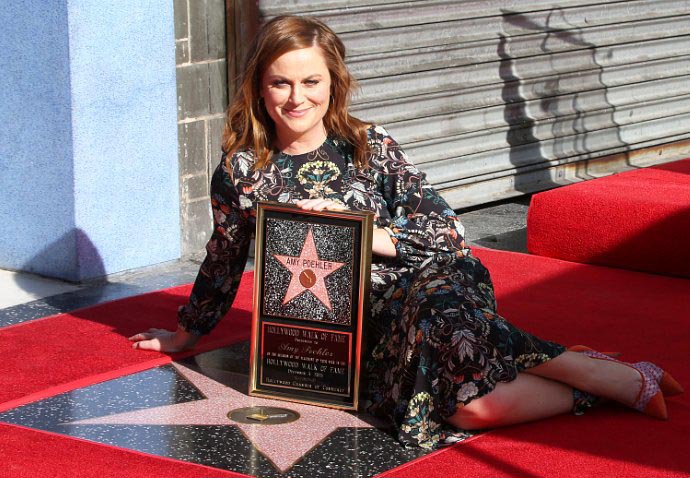 Amy Poehler is now a name on Hollywood Walk of Fame. The comedienne received the 2,566th star on Thursday, December 3 in Los Angeles, accompanied by her “Parks and Recreation” co-stars Rashida Jones and Mike Schur.

The 11:30 A.M. ceremony was held in front of the Hollywood Wax Museum on Hollywood Boulevard. Introducing the “star”, Jones joked on the podium that she only showed up because “a good friend” of Poehler, whom everyone presumed would be Tina Fey, dropped out last minute. And she went on reading a speech from the supposed friend and revealed that it was Johnny Depp.

Poehler then took the stage and said, “I’ve been told I’m in-between Roseanne Barr and Sally Field, which also describes my career in a way, if I play my cards right. I wanna share a story with you from this morning. I woke up and I felt so excited to be here with my friends and family and I had tea with my family and I received a text from Carol Burnett, which was really exciting and I’m front-door bragging about that, she did text me this morning. We’re friends. I have her number. And she said, ‘Best of luck on getting your star’.”

She continued, “Then I went to the gas station and as I was pumping my gas, I left my wallet on the roof of my car, and I drove away, and I thought I had lost my wallet forever, but it was returned to me just an hour ago from a charming, slim gentleman who works at Ford models, who goes by the name of Dilly. And I tell you this story to remind us that people can be good, that no one can do it alone, and I still pump my own gas.”

After thanking family and friends, Poehler recalled her humble childhood, saying she “had no brush with greatness. I knew no one that was an actor or writer. I never imagined I would be here, truly. It’s a genuine honor.”

The ceremony came a few weeks before her new comedy “Sisters” hits the screen. Poehler stars in the movie with Fey who was also set to receive her own Hollywood Walk of Fame star but is yet to have a ceremony. Poehler suggests her bestmate to go with a guy named Kenny. “You go, ‘I’m ready for a star, man!’” Poehler told ABC News. “And you get in his van, and he takes you to a place, you get a star, and if he likes doing the star with you, then you get it! At least that’s how it worked with me.”